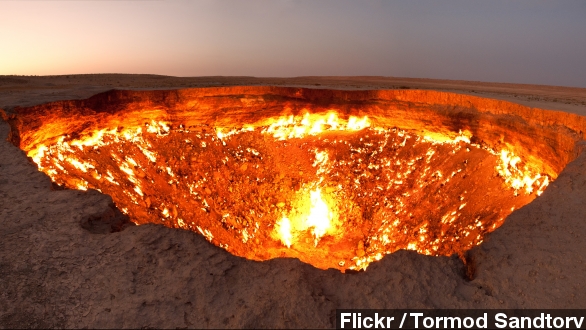 Scientists set fire to a crater in 1971 thinking it would burn out in a few days. More than 40 years later, the crater is still burning.

Locals call it the "Door to Hell."

Scientists expected this 230-foot-wide crater to burn out a few hours after it was started. That was in 1971. The flames have been blazing for more than 40 years. (Via YouTube / Fly Dime)

The Huffington Post says a Soviet team of scientists were drilling in search of natural gas reserves in the middle of the desert near Derweze, a village in Turkmenistan, when the rig collapsed.

The team was worried the hole might release poisonous methane. So the researchers thought it would be best to light the crater on fire to burn off the gas. They expected this to only take a few days. Not so much.

The Daily Mail says the Karakum desert, where the scientists were drilling all those years ago, "has one of the largest gas reserves in the world."

Daily Star reports those reserves are expected to make Turkmenistan extremely wealthy within the next couple decades.

The Daily Beast reports the central Asian nation's president vowed to fill the hole in 2010, but that order was never carried out.

More than 40 years after the flames started, they're still going strong. The crater has became a tourist attraction with hundreds flocking to see the fiery hole every year. (Via YouTube / Biedjee)

We'll take his word for it.