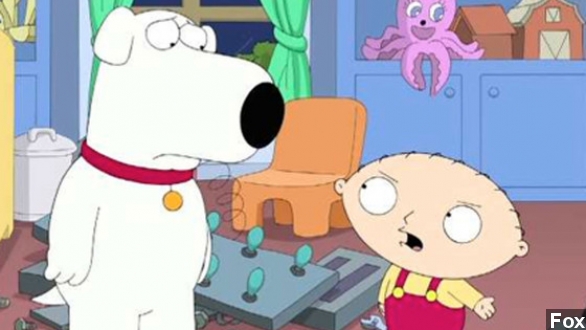 The Fox sitcom's executive producer warned months ago one of the Griffins would perish.

​The writers hinted at it for months. Someone on one of TV's most irreverent shows was going down. But Sunday night's "Family Guy" episode on Fox was titled "Life of Brian." They wouldn't.

No, he's fine. It's a cartoon. Creator Seth MacFarlane wouldn't kill off the family dog, one of the characters he voices himself. This isn't The Wire or Game of Thrones.

"I love you all." (heart monitor straight lines)

Speculation's been going since the comic convention Comic-Con in San Diego when an executive producer told the crowd they'd kill of a member of the Griffin family. (Via Zap2It)

Then, of course, the show's executives likely tried to throw us a curveball by including a clip in the Season 12 preview of Peter throwing his daughter Meg into a grave. (Via Metro)

So the talking, alcoholic dog is gone. What's worse, genius Griffin baby Stewie destroyed his time machine earlier in the episode, so he can't get his best friend back.

Executive producer Steve Callaghan told E!, "As much as we love Brian, and as much as everyone loves their pets, we felt it would be more traumatic to lose one of the kids, rather than the family pet." (Via E!)

As for whether Brian is truly gone forever, MacFarlane's Twitter page was dead silent as of early Monday morning. (Via Twitter / @SethMacFarlane)

Okay, fine. Brian's gone and the Griffins will pay their respects and take the proper time to mourn.

"So after Brian's death, the Griffins go get a brand new dog in the same episode." (Via WHDH)

Oh, come on! The new dog named Vinny is voiced by Tony Sirico who played Paulie on "The Sopranos." I just...I don't know anymore. (Via Wikia)