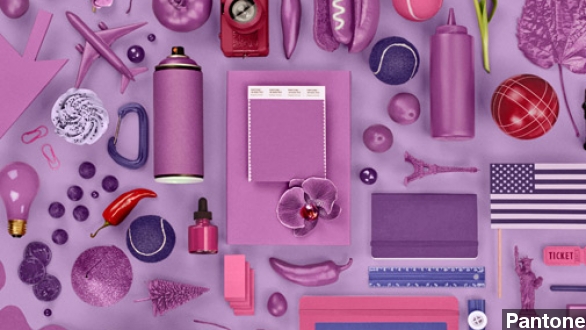 The leading authority on all thing color has chosen 2014's color of the year, and it might just put some purple pep in your step — or at least on your clothing, electronics and trendier home decor.

"​Expect to see a lot of this next year. It is called radiant orchid. ... This purple hue is announced as the 2014 color of the year." (Via WJLA)

"Officially known as radiant orchid, it's considered to be off the beaten path. …  This information is used by the people who pick colors for clothing and other products." (Via WFAA)

"Radiant orchid denotes some creativity; it is from the purple family. It's the color of innovation and the color of originality. ... What it's doing is encouraging people to be more creative and inventive, and in today's society, that is something we are all striving for." (Via Bloomberg)

New Jersey-based Pantone sets professional color standards for the design industries. It aims to catalog every hue and its accompanying tone within its color system.

Since 2000, the company has been using its insider access and a committee of experts to predict the color most likely to dominate global fashion, home and industrial design that given year.

"Pantone color number 18-3224. Expect to see it on everything from lipstick to Chevys. Designers around the world look to Pantone to set the color for the upcoming year." (Via Fox Business)

But as the seasons and the trends change, can you really pick an "it" color for an entire year? At least one commercial fashion heavyweight says no. Well, at least not for more than a season. (Via YouTube / Pantone)

"Women who follow fashion want to be wearing the color of the moment," Ken Downing, fashion director for Neiman Marcus, told The Wall Street Journal. "There's an "It" color for spring. It's pink."

And according to color-competitor Sherwin Williams, the color of 2014 is "exclusive plum," a dusky, elegant violet.

But with housewares, cosmetics and even menswear accessories popping up in pink-and-purple-infused fuchsia just in time for the holiday season, looks like radiant orchid was a solid choice.