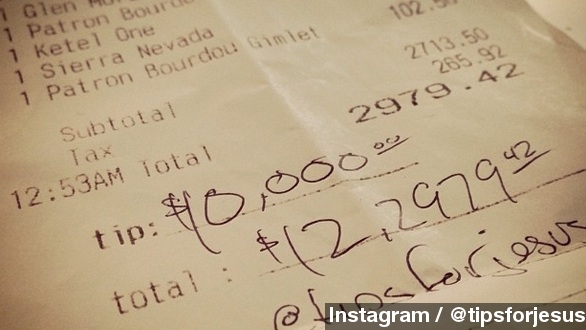 A mysterious tipper has left tips ranging from $500 to $10,000 and posting on Instagram under "@TipsForJesus."

​Christmas has been coming early for waiters and waitresses around the country, and it’s being delivered in the name of the birthday boy himself.

A mysterious tipper, known only by the tag @tipsforjesus, has been leaving tips ranging from $500 to $10,000 at bars and restaurants from Michigan to California. (Via The Huffington Post)

But it’s still not clear if this anonymous do-gooder  or a group of like-minded, deep-pocketed individuals, but the anonymous pseudonym has reportedly given over $54,000 to waitstaff already.

Whoever they are, the donor or donors seem to be making up for some snubs on gratuity also made in the name of the Man Upstairs. For one, Pastor Alois Bell came under fire when a photo surfaced on Reddit of her bill at Applebee’s, on which she crossed out the automatic gratuity and wrote in “I give God 10%, why do you get 18? (Via Time,  Reddit)

Anyway, whether the “Tips for Jesus” are given to right some previous religious wrongs or simply to spread cheer during the holidays, the anonymous tipper is giving waiters and waitresses a reason to keep their day job.