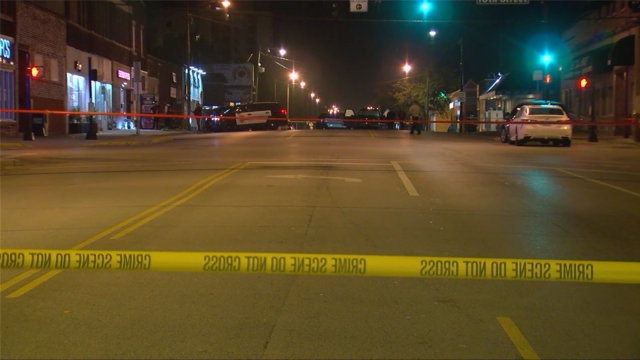 Both suspects have been charged with four counts of first-degree murder after a bar shooting left four people dead and five more injured.

Three of the four people killed in a Kansas City, Kansas, shooting have been identified. Alfredo Calderon, Everado Meza and Francisco Garcia Anaya were killed at a bar early Sunday morning. Police have one suspect in custody, but they say a second suspect is still at large and considered armed and dangerous.

Police responded to the shooting at a members-only bar called Tequila KC at around 1:30 a.m. local time. The venue's owner told The Kansas City Star that the bar's security guard was not there that night.

The bartender who was working that night told the Star he'd refused to serve a man because he had caused problems previously. The man reportedly threw a cup at the bartender and left. The bartender says that man returned hours later with another man and started shooting.

Four people died at the scene. Five more people were injured and taken to the hospital, and they are all expected to survive.

The four men killed were Hispanic, but police don't believe the attack was racially motivated.

Sunday night, friends and family of the victims gathered for a candlelight vigil. Celeste Trevino, who was at the bar at the time of the shooting, believes one of the victims saved her life. She said of Everado Meza: "We saw a guy come up and literally pull a gun out and point it at us. Next thing I knew, [Meza] had to have pushed me, or else I would have got shot because I was in front of him. ... By the time I looked up, he was on the floor."

Both suspects have been charged with four counts of first-degree murder, and their bond is set at $1 million each.