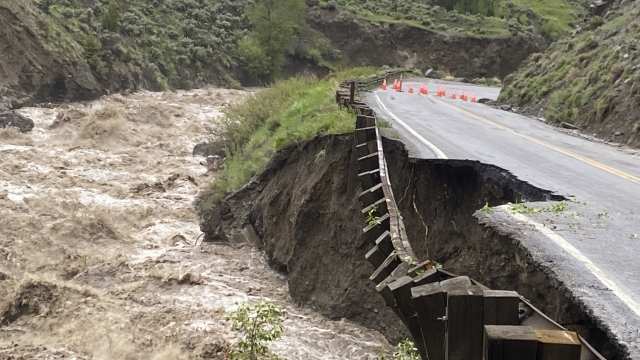 While no one has been reported killed or injured, waters were only starting to recede Tuesday and the full extent of the destruction wasn't yet known.

Yellowstone National Park officials say over 10,000 visitors — all but one group of backpackers — had evacuated the park by Tuesday as it evaluates damage from massive flooding.

Superintendent Cam Sholly said the visitors were asked to leave after roads and bridges washed out and power was knocked out from heavy rains and snow melt.

The flooding hit historic levels in the Yellowstone River, where it washed out several sections of the main highway from the park's north entrance.

The torrent undercut the river bank and toppled a house where the families of six park employees had lived into the raging waters. The building, which had been evacuated, floated 5 miles downstream before sinking.

Sholly said one group of campers was still in the backcountry. They had been contacted and crews were prepared to evacuate them by helicopter, but that hasn't been needed yet, he said.

Sholly added he didn't believe the park had ever shut down from flooding. He said the north entrance is expected to be closed all summer.

THIS IS A BREAKING NEWS UPDATE. AP's earlier story follows below.

The flooding across parts of southern Montana and northern Wyoming from days of rain and a rapidly melting snowpack indefinitely closed one of the nation's most iconic parks just as a summer tourist season that draws millions of visitors was ramping up.

Instead of marveling at the site of massive elk, grizzlies and bison roaming freely, burbling thermal pools and the regular blast of Old Faithful's geyser, tourists found themselves witnessing nature at its most unpredictable as the Yellowstone River crested in a chocolate brown torrent that washed away anything in its path.

"It is just the scariest river ever," Kate Gomez of Santa Fe, New Mexico, said Tuesday. "Anything that falls into that river is gone. The swells are huge, and it's just mud and silt."

While no one has been reported killed or injured, waters were only starting to recede Tuesday and the full extent of the destruction wasn't yet known.

Gomez and her husband were among hundreds of tourists stuck in Gardiner, Montana, a town of about 800 residents at the park's north entrance. The town was cut off for more than a day until Tuesday afternoon, when crews managed to get part of a washed away two-lane road reopened. Officials warned that driving conditions were still dangerous.

While the flooding can't directly be attributed to climate change, it came as the Midwest and East Coast sizzle from a heat wave and other parts of the West burn from an early wildfire season amid a persistent drought that has increased the frequency and intensity of fires that are having broader impacts. Smoke from a fire in the mountains of Flagstaff, Arizona, could be seen in Colorado.

Rick Thoman, a climate specialist at the University of Alaska Fairbanks, said a warming environment makes extreme weather events more likely than they would have been "without the warming that human activity has caused."

"Will Yellowstone have a repeat of this in five or even 50 years? Maybe not, but somewhere will have something equivalent or even more extreme," he said. "It was just this time last year we were talking about the heat dome over the Pacific Northwest. These extreme heat events are becoming more common."

Heavy rain on top of melting mountain snow pushed the Yellowstone, Stillwater and Clarks Fork rivers to record levels Monday, according to the National Weather Service.

Officials in Yellowstone and in several southern Montana counties were assessing damage from the storms, which also triggered mudslides and rockslides. Montana Gov. Greg Gianforte declared a statewide disaster.

Some of the worst damage happened in the northern part of the park and Yellowstone's gateway communities in southern Montana. National Park Service photos of northern Yellowstone showed a mudslide, washed out bridges and roads undercut by churning floodwaters of the Gardner and Lamar rivers.

In Red Lodge, Montana, a town of 2,100 that's a popular jumping-off point for a scenic, winding route into the Yellowstone, a creek running through town jumped its banks and swamped the main thoroughfare, leaving trout swimming in the street a day later under sunny skies.

Residents described a harrowing scene where the water went from a trickle to a torrent over just a few hours.

The water toppled telephone poles, knocked over fences and carved deep fissures in the ground through a neighborhood of hundreds of houses. The power was knocked out but restored by Tuesday, though there was still no running water in affected neighborhood.

Heidi Hoffman left early Monday to buy a sump pump in Billings, but by the time she returned her basement was full of water.

"We lost all our belongings in the basement," Hoffman said as the pump removed a steady stream of water into her muddy backyard. "Yearbooks, pictures, clothes, furniture. Were going to be cleaning up for a long time."

On Monday, Yellowstone officials evacuated the northern part of the park, where roads may remain impassable for a substantial length of time, park Superintendent Cam Sholly said in a statement.

But the flooding affected the rest of the park, too, with park officials warning of yet higher flooding and potential problems with water supplies and wastewater systems at developed areas.

The rains hit just as area hotels have filled up in recent weeks with summer tourists. More than 4 million visitors were tallied by the park last year. The wave of tourists doesn't abate until fall, and June is typically one of Yellowstone's busiest months.

It was unclear how many visitors to the region remained stranded or have been forced to leave Yellowstone, or how many people who live outside the park were rescued and evacuated.

Mark Taylor, owner and chief pilot of Rocky Mountain Rotors, said his company had airlifted about 40 paying customers over the past two days from Gardiner, including two women who were "very pregnant."

Taylor spoke as he ferried a family of four adults from Texas, who wanted to do some more sightseeing before heading home.

At a cabin in Gardiner, Parker Manning of Terre Haute, Indiana, got an up-close view of the roiling Yellowstone River floodwaters just outside his door.

Entire trees, debris and even a lone kayaker floated by on the choppy flow. In early evening, he shot video as the waters ate away at the opposite bank where a large brown house was precariously perched.

In a large cracking sound heard over the river's roar, the house tipped into the waters and was pulled into the current and floated off downstream.

In south-central Montana, flooding on the Stillwater River stranded 68 people at a campground. Stillwater County Emergency Services agencies and crews with the Stillwater Mine rescued people Monday from the Woodbine Campground by raft. Some roads in the area are closed because of flooding and residents have been evacuated.

The sheriff's office said it would assess damage when waters receded.

The towns of Cooke City and Silvergate, just east of the park, were also isolated by floodwaters.

In Livingston, residents in low-lying neighborhoods were told to leave and the city's hospital was evacuated as a precaution after its driveway flooded.

Officials in Park County, which includes Gardiner and Cooke City, said extensive flooding throughout the county had made drinking water unsafe in many areas.

The Montana National Guard said Monday it sent two helicopters to southern Montana to help with the evacuations.

In the hamlet of Nye, at least four cabins washed into the Stillwater River, said Shelley Blazina, including one she owned.

"It was my sanctuary," she said Tuesday. "Yesterday I was in shock. Today I'm just in intense sadness."

Cory Mottice, a meteorologist with the National Weather Service in Billings, Montana, said rain is not in the immediate forecast, and cooler temperatures will lessen the snowmelt in coming days.

"This is flooding that we've just never seen in our lifetimes," Mottice said.

The Yellowstone River at Corwin Springs crested at 13.88 feet Monday, higher than the previous record of 11.5 feet set in 1918, according the the National Weather Service.

Yellowstone got 2.5 inches of rain Saturday, Sunday and into Monday. The Beartooth Mountains northeast of Yellowstone got as much as 4 inches, according to the National Weather Service.