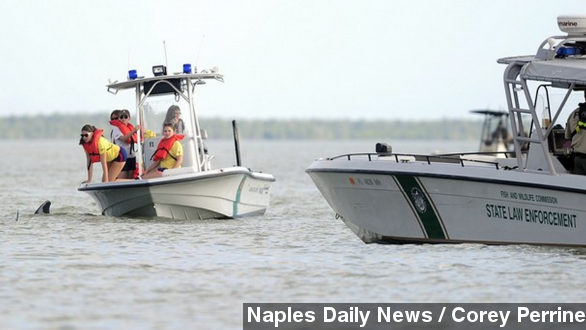 Rescuers say the outlook does not look good for the dozens of remaining pilot whales stranded off the coast of Florida's Everglades National Park.

Wildlife officials say the outlook "does not look good" for dozens of pilot whales found stranded in shallow waters Tuesday off the coast of Florida's Everglades National Park.

Ten of the whales were dead as of Thursday morning, including four pod-mates euthanized by wildlife officials after they were found to be in quote "poor condition." (Via CNN)

Now federal, state and park wildlife officials are racing to save the remaining whales in the pod, but the situation looks bleak after attempts to guide the whales back out to sea failed Wednesday.

Experts from the National Oceanic and Atmospheric Administration told NBC: "Many of the survivors may be suffering from dehydration and malnutrition, and they need to make it at least 20 miles to reach waters deep enough to support them."

Wildlife officials went on to say many of the whales were swimming about freely in shallower waters, but would not leave behind other whales in the pod when the rescue team tried to coerce them farther out to sea.

Short-finned pilot whales, which can grow to be more than 20 feet long, are extremely social and loyal mammals. This type of cohesion can doom an entire group if even just one of the whales becomes beached, which isn't all that uncommon in Florida. (Via YouTube / BlueWorldTV)

In 2012, more than two dozen pilot whales were found stranded and beached in South Florida, and similar situation happened in the Florida Keys in 2011. Experts believe in both those instances that the whales became stranded because they refused to leave behind a sick or fallen member of their pod. (Via The Telegraph)

It's unclear why or how this pod of whales got to such a remote area. Wildlife officials say they had to swim through nearly 20 miles of sand bars and flats to get from the deep water where they normally reside to where they are now. (Via WPTV)

Rescuers will determine Thursday morning whether to resume with the rescue efforts or euthanize the remaining distressed and malnourished whales.