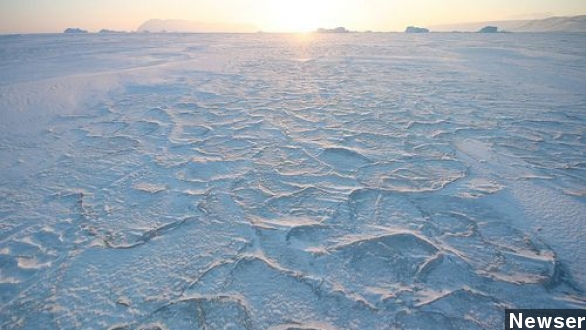 The body of water is believed to be bigger than West Virginia, covering some 27,000 square miles.

Underneath a Greenland ice sheet lies a body of water covering an area larger than West Virginia — and until just a few years ago scientists had no idea it existed.

First discovered in 2011, scientists now believe it covers some 27,000 square miles, and contains more than 100 billion tons of liquid water. (Via Nature Geoscience)

The melt water reservoir was discovered under the ice in the southeastern portion of Greenland by researchers from the University of Utah about two years ago.

According to the BBC, the researchers initially expected to find water stored in small caches between the rocks. What they actually found was a massive reservoir of water trapped in the ice.

Kind of like the liquid in a sno cone. (Via Wikimedia Commons)

Newser quotes lead study author Richard Forster saying: “We thought we had an understanding of how things work in Greenland, but here is this entire storage system of water we didn't realize was there.”

Okay. So, slushy water under the ice in Greenland. Why is that a big deal?

Well, researchers say it could provide new clues to understanding Greenland’s ice melts — and sea-level rise in general. (Via NASA)

Voice of America quotes Forster saying, "Of the current sea level rise, the Greenland Ice Sheet is the largest contributor – and it is melting at record levels. So understanding the aquifer's capacity to store water from year to year is important because it fills a major gap in the overall equation of meltwater runoff and sea levels."

According to researchers the water is 15 to 60 feet beneath the surface and likely stays fluid because it’s insulated by snow. They're unsure how old the reservoir is or whether it drains into the ocean.