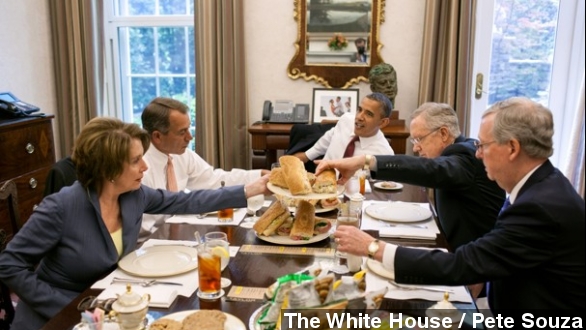 Even the infamous "Do-Nothing Congress" of 1948 got more work done than the 113th Congress.

If the last Congress was the least productive ever, this year's is living up to that name. (Via The White House)

With less than 10 days to go on this year's legislative calendar, the Republican-led House and Democratic-controlled Senate have quite the to-do list.

To be fair, the average number of pages per bill has increased by about five in the last decade. So, with lawmakers cramming more into each bill, there are bound to be fewer of them. Still, when you consider the quality of the work done this year, Congress' achievements seem even less impressive.

Pew Research Center’s Drew DeSilver told NBC when you take things like bridge namings and post office honors out the equation, you're left with 44 of what he calls "substantive" laws, leaving a whole slew of measures facing year-end deadlines that haven't yet made it to the president's desk.

Of those — funding a new farm bill and food stamps, extending unemployment benefits, passing an annual defense authorization bill, oh, and then there's the budget. Without a new deal, lawmakers will have another government shutdown on their hands next year. (Via Wikimedia Commons / Office of Sen. Patrick Leahy)

And that's not including other hot-button issues stalled in the House like immigration reform and gay rights legislation. They're stuck there, Senate Democrats say, because the GOP won't compromise.

True, about 150 House bills are currently awaiting Senate action. But as Frank James at NPR explains, there's a reason for that, writing: "It's easier for the majority to pass legislation in the House, where the rules essentially make the party in control an unstoppable force, than in the Senate. The rules there give the minority party a number of ways to stop legislation."

Of course, not everyone is bothered by the inaction. Critics of big government, namely in the GOP's Tea Party wing, have made clear they'd like to see a Congress that produces fewer laws. (Via Euronews)

As Republican Rep. Steve Southerland told The Wall Street Journal: "If you value government doing things, you're going to be more harsh on what we've done. But if you think government does too much, then it's not as alarming."

Now to be fair, lawmakers on Capitol Hill are getting some work done. The House Committee on Science, Space, and Technology is scheduled to meet Wednesday. On the agenda? Discussing the possibility of life on other planets.