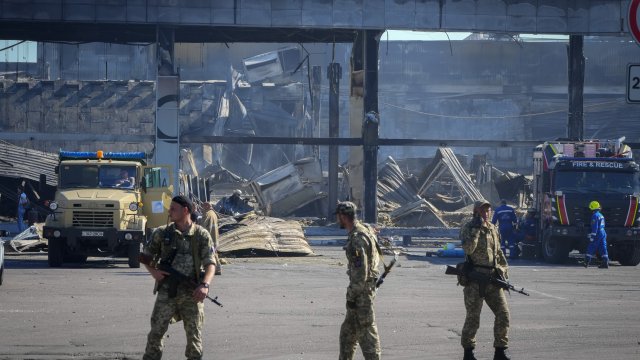 Russia's Defense Ministry said Thursday that it had withdrawn its forces from a Black Sea island near Ukraine's port of Odesa.

Spokesman Igor Konashenkov said that it pulled back its forces from the Zmiyinyi (Snake) Island Thursday in what it described as an "act of goodwill."

Konashenkov added that the pullout has demonstrated that "the Russian Federation wasn't hampering the United Nations' efforts of organizing a humanitarian corridor to import agricultural goods from the territory of Ukraine."

Ukraine and the West have accused Russia of blockading Ukrainian ports to prevent the export of grain, contributing to the global food crisis.

Russia has denied the accusations and charged that Ukraine needs to remove sea mines from the Black Sea to allow safe navigation.

Russia took control of the island in the opening days of its special military operation in Ukraine.

On Wednesday, Ukrainian President Volodymyr Zelenskyy said that 144 Ukrainian fighters were released from Russian captivity as part of a prisoner swap.

Of those released, 95 were involved in defending the Azovstal steel plant in Ukraine's devastated southern city of Mariupol before Russian forces captured it weeks ago.

Denis Pushilin, the separatist leader in Donetsk, said an equal number of soldiers was released by both sides.

"Just a Russian strike on Mykolaiv today, with 10 missiles hitting only civilian sites, proves alone for everyone around the world that the pressure on Russia isn't sufficient," he added.

Zelenskyy also said Ukraine would cut ties with Syria over its recognition of Ukraine's eastern Luhansk and Donetsk regions as "independent and sovereign."

Syria is a strong ally of Russia, which joined Syria's conflict in September 2015 helping tip the balance of power in favor of President Bashar al-Assad.