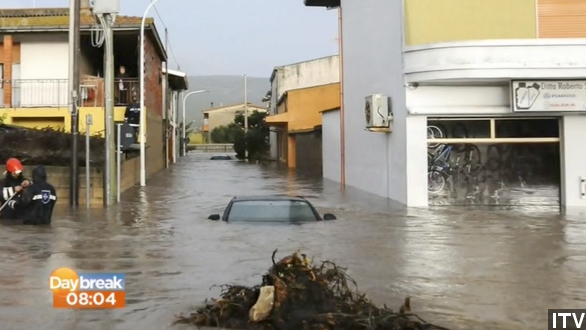 As many as 17 people have died after heavy rain from Cyclone Cleopatra caused severe flash flooding on the Italian island of Sardinia.

As many as 17 people have died after heavy rain from Cyclone Cleopatra caused severe flash fooding on the Italian island of Sardinia.

As much as a foot of rain fell over a 12-hour period causing water as high as 10 feet to race through towns taking cars and people with it.

"A family of four dying when waters burst into their basement flat."

The situation has been described as dramatic by officials as many people remain unaccounted for. Officials believe the death toll will rise.

The island of Sardinia is located just south of Corsica and to the southwest of the Italian mainland. It is a popular vacation destination .

Deutsche Welle reports Olbia, a small city in the northeast portion of the island, experienced the worst of the storm. The city's mayor said the city is destroyed.

Rescue crews are working to rescue those still trapped by the storm and the Italian government has allocated $27 million in immediate aid for the island. The country has declared a state of emergency.