At Least 18 Dead, 150 Hurt After Plane Skids Off Runway In India 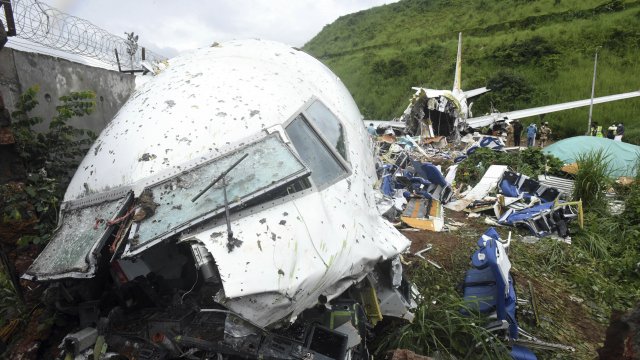 Heavy rain and poor visibility may have played a role in crash.

At least 18 people are dead and more than 150 are hurt in India after a plane skidded off an airport runway Friday and split into two.

The Air India Express flight was returning people to India after they'd been stranded abroad due to the coronavirus. 190 passengers and crew were on board.

A government official said heavy rain and poor visibility may have played a role in the flight overshooting the runway at Calicut International Airport in the southern Indian city of Kozhikode. It crashed nose-first 35 feet into a slope, killing both pilots.

At least 15 of the injured remain in critical condition. An emergency official called it a "miracle" that the plane didn't catch fire as fuel leaked out.

India's Aircraft Accident Investigation Bureau is conducting a formal investigation into the crash. The flight data recorder and cockpit voice recorder have been recovered from the wreckage.

This is India's worst passenger aircraft accident since 2010.