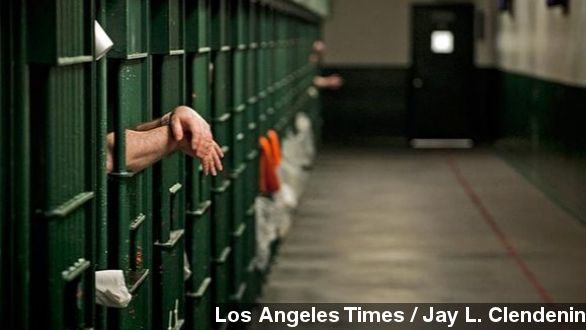 The FBI has indicted 18 Los Angeles County sheriff's deputies after a two-year investigation into the county's prison system revealed widespread abuse and misconduct.

The charges follow a long string of reported abuses in the Los Angeles County prison system. A U.S. attorney told reporters, "The pattern of activity alleged in the obstruction of justice case shows how some members of the Sheriff’s Department considered themselves to be above the law." (Via The New York Times)

The Los Angeles Times has details behind some of the more egregious accusations, including the detention and unlawful search of the Austrian consul and her husband, and one incident where a visitor was beaten by police — and almost charged with battery thanks to falsified police reports.

And the Sheriff's Office allegedly didn't welcome the investigation. Prison officials are accused of obstructing access to inmate Anthony Brown after they discovered he was an informant for the FBI.

Arrested in 2005 for armed robbery, Brown is serving 423 years to life. Brown's cover was blown in 2011, when his jailors confiscated his cell phone and found he was making calls to the FBI. (Via KABC)

"Brown says once his cover was blown, he was moved from the jail, had his name changed in the prison system, and was interrogated by deputies on whether he planned to testify in court." (Via Los Angeles Times)

Los Angeles County Sheriff Lee Baca, who has served four five-year terms and is up for reelection this year, told reporters his department has fully cooperated with the federal investigation.

"While the indictments were not unexpected, it is nonetheless a sad day for this department. We do not tolerate misconduct by any deputies." (Via KCAL)

Sixteen of the indicted officers have already been taken into custody and are expected to be arraigned late Monday.