In Syria, Aid Might Take Months ... If It Comes At All 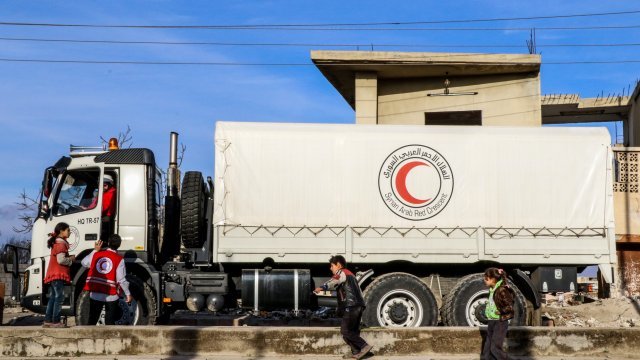 Last year was dismal for aid deliveries in Syria; only an average of 27 percent of the population in besieged areas received any aid.

For the first time in months, aid has reached this besieged opposition-held part of Syria.

The Syrian Arab Red Crescent, a humanitarian group, said a nine-truck convoy arrived in Eastern Ghouta. It carried enough relief materials for only about 1,400 families in the region, which isn't much.

The U.N. estimates nearly 400,000 people are trapped in the area, which lies just east of the Syrian capital of Damascus. It's been under siege by the Syrian government since 2013 and has faced relentless bombings.

The last convoy to deliver aid to Eastern Ghouta was in November, when supplies for about 30,000 people were delivered to the city of Douma.

With Half Its People Displaced, Syria's Wars Are Far From Over

Violence in Syria isn't just a factor of the country's civil war. Several conflicts are raging.

In all, 2017 was a dismal year for aid deliveries in Syria. On average, for every four people needing aid in besieged and hard-to-reach places, only one received it. The aid workers who the government did let in were often stripped of their medical items before they could continue into opposition territory.

So far, 2018 hasn't been much better. A February spike in airstrikes in Eastern Ghouta has killed more than 230 in less than a week, and there have already been three suspected chlorine attacks in the area since the year started.

But it's not just in opposition areas. Reports say indiscriminate shelling in Damascus has killed civilians. The U.N. has called for a de-escalation in violence, but so far, those calls have gone unheeded.