245,000 Kids Attend School Near Oil And Gas Production Across U.S. 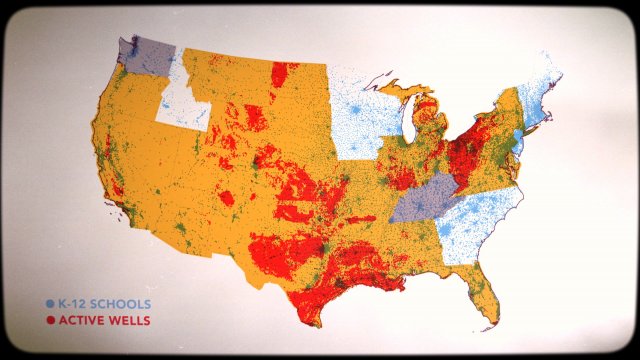 Newsy analysis finds more than 600 schools, with a total of more than 245,000 students, are located within 500 feet of an active oil or gas well.

In West Los Angeles, you'll find a strange building sitting between two synagogues and a private girls' school. It's called Cardiff Tower, and it actually looks like a very tall synagogue itself — at least from the street.

But if you could peek beyond the ivy-covered walls you’d find that what looks like a massive building is actually a disguised set of active oil and gas wells.

And that could be a health risk for the girls who attend school just across the street.

Oil and gas wells emit known carcinogens like benzene. According to research out of the Colorado School of Public Health, for people living within 500 feet of an oil or gas facility, the cancer risk is 8 times higher than the EPA’s accepted threshold.

According to a Newsy analysis, this private girls' school in Los Angeles is just one of more than 600 schools in the nation -- with a total of more than 245,000 students -- located within 500 feet of an active well.

We got those numbers by combining data on all the K12 schools in the U.S. with data about all the active wells.

We were able to get this data for wells in 30 out of the 33 states that have active oil and gas drilling operations.

To find schools near wells, we plotted all the schools on a map and drew a circle around each of them with a 500 foot radius then we looked for active oil and gas wells inside those circles.

Ohio, West Virginia, Texas, Louisiana and Pennsylvania are the states with the highest percentage of their students attending school within 500 feet of an active well.

Some schools are unlucky neighbors, but then there are cases like Maryvale Middle School in Cheektowaga, NY — where the school district operates one gas well on school grounds, and a third-party operates another on campus just to the east.

For every child who attends school near a well, we estimate there are many more people who actually live within the 500-foot risk zone — about 1.4 million people nationwide.

We dig deeper into why this drilling is happening — and its impact on people — in Newsy's feature-length documentary Blowout. And for state-by-state information on high-risk zones near drilling, check out newsy.com/blowout.