25 Years After The Berlin Wall, These Barriers Remain 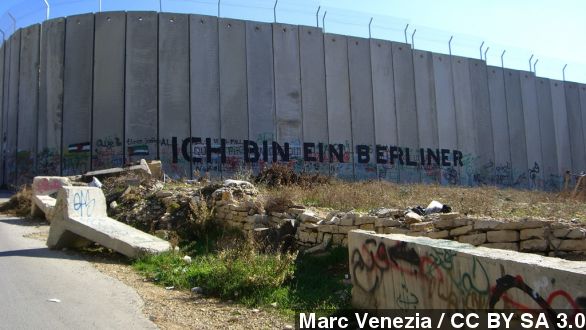 The 25th anniversary of the fall of the Berlin Wall serves as a reminder that other barriers still divide countries today.

It’s been 25 years since the Cold War barrier that separated East and West Germany came down. (Video via U.S. Department of Defense)

TOM BROKAW VIA NBC: "Tonight citizens from both Germanys are singing and dancing on the wall itself."

PETER JENNINGS VIA ABC: "How do you measure such an astonishing moment in history?”

The Berlin Wall no longer exists, but other walls still divide countries today.

The small island nation of Cyprus has been split in two since a Turkish invasion in 1974. Civil war between the Greeks and Turks on the island led the United Nations to set up a buffer zone between the two communities. (Video via ITN)

The 400-mile long separation barrier that runs through the West Bank goes by different names. For Israelis, it’s a security fence. For Palestinians, it’s an apartheid wall.

Construction began in 2002 at the height of the second intifada. The barbed wire fences, concrete walls and checkpoints cost Israel $260 million a year to maintain. (Video via Jewish News One)

The Israeli government says the barrier is necessary to keep terrorists and suicide bombers out of Israel, but critics say it's both a physical and symbolic hurdle to peace with the Palestinians.

"Peace" is in the very name of the walls that run through Northern Ireland. The so-called peace walls were installed to keep Catholic and Protestant neighborhoods from fighting.

There are nearly 50 of them — some reaching 25 feet high. Residents on either side say the walls keep them safe. (Video via YouTube / TonyMo Armondo)

But Northern Ireland's unity government has announced a plan to demolish all of them within the next decade.

The world’s most militarized border, on the other hand, isn't going anywhere anytime soon. The 160-mile-long demilitarized zone divides North and South Korea along the 38th parallel.

It was created in 1953 as part of the truce that ended the Korean War. (Video via Woodrow Wilson Center)

Today, the two Koreas are still technically at war with troops stationed on either side of the DMZ in a tense stare down. (Video via National Geographic)

It's not a physical barrier, but a digital one. The Great Firewall of China keeps the country’s 600 million Internet users from freely accessing the web.

With a cyberpolice force of 50,000, China's censorship system is among the most complex in the world.

So perhaps it's no surprise that while the rest of the world saw this doodle on their Google homepage Sunday, in Hong Kong, it looked like this.

This video includes images from Getty Images, bot / CC BY 2.0, and music from Chris Zabriskie / CC BY 4.0.