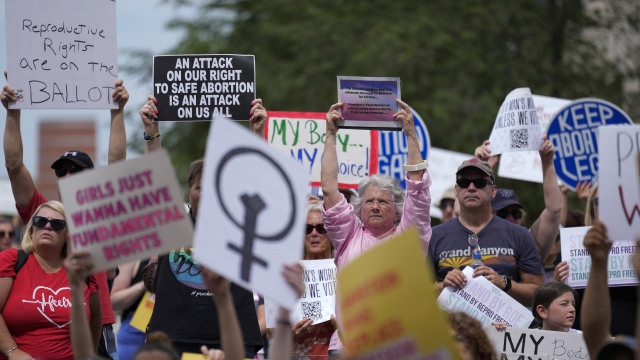 A 27-year-old man was arrested and is sitting behind bars in Columbus, Ohio, tonight charged with impregnating a 10-year-old girl who traveled to Indiana for an abortion in June.

The alleged timeline is heartbreaking.

According to the Columbus Dispatch, the girl's mother notified Franklin County Children Services of the pregnancy just two days before the Supreme Court overturned Roe v. Wade. She traveled to neighboring Indiana about a week later to have an abortion because she was just three days past the six week time frame allowed in her home state, where there are no exceptions for rape or incest.

This case set off a flurry of sympathy and outrage from many in favor of abortion rights including the President of the United States.

"Just imagine being that little girl. Ten years old. Does anyone believe that it's Ohio's majority view that that should not be able to be dealt with?," President Biden said.

There was heated debate in the halls of Congress.

"Do you think a 10-year-old should choose to have a baby?,"  California Representative Eric Swalwell said.

"It would probably impact her life and therefore would not be an abortion," anti-abortion activist Catherine Glenn Foster said.

REP. ERIC SWALWELL: Wait — it would not be an abortion if a 10-year-old with her parents made the decision to have a baby that was a result of rape?

CATHERINE GLENN FOSTER: If a 10-year-old became pregnant as a result and it was threatening her life, then that's not an abortion, so it would not fall under any restriction in our nation.

Sarah Warbelow is the legal director for the Human Rights Campaign.

But the reaction from the right-wing media was one of denial after the Indianapolis Star published the article. Various outlets posted headlines like "An Abortion Story Too Good to Confirm" and calling the story "an activist tale looking like a lie."

"I's just too rich to verify. It's just too great. We can get kicks and clicks," Kellyanne Conway said on Fox News.

Republican politicians from across the country, including Ohio Attorney General Dave Yost, joined in on casting doubt on the validity of the story.

"We have regular contact with prosecutors and local police and sheriffs, not a whisper anywhere. We don't know who the originating doctor in Ohio was, if they even exist," Yost said.

Yost, after numerous interviews denying the facts of this case, is now backtracking on his contact with law enforcement about the case, thanking the Columbus Police for "securing a confession," but admitting that he had not checked with the majority of agencies on this case.

"You're asking me if I called every one, or had somebody call every one. No, I didn't," Yost said.