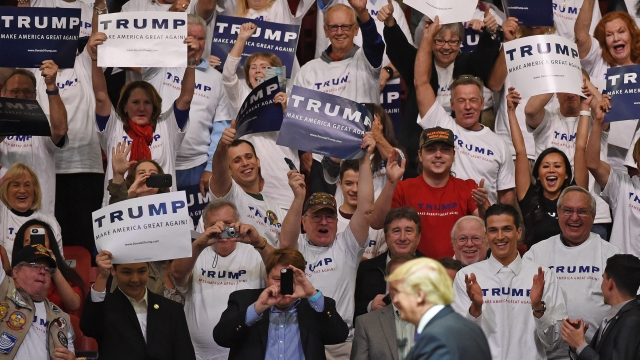 The presumptive Republican nominee is no joke.

For a lot of people, it's easy to think of Donald Trump as a joke.

But purely by the numbers, he's not — he's an unprecedented and unpredictable political force.

For one, Trump wins with different corners of the Republican party that no candidate has been able to win before. He crosses a divide in the GOP that's been in place since the Civil Rights era.

Statistically, the single best predictor for Trump support is the lack of a college degree. But that popularity among people without diplomas cuts across a lot of regions.

That's why no Republican candidate has ever won the range of states Trump has won in this primary — from the Deep South to New England.

Also, you have to notice just how adaptable Donald Trump is as a politician. His stances have been all over the map to a point where it's difficult to pin down where he is.

If you saw him talking to press on Super Tuesday, you could already see him toning things down, refining his message.

And there's one other big reason this general election is so unpredictable: Hillary Clinton is an establishment candidate in an anti-establishment year.

Whether you believe what he's saying or not, it's not difficult to see Trump's economic populist message playing well against her — especially given the Wall Street connections that have dragged her down in the primary.

And that’s probably why a lot of smart pollsters and pundits, including Nate Silver and David Axelrod, have pointed to a weakness in Trump that probably won't change: Most of America just really doesn't like him.

Once you look outside the Republican party, his favorability rating is bad, no way around it. It's why Axelrod, Obama's 2008 campaign manager, told Vox taking Trump apart on policy won't work as well as taking him apart on his record and his offensive statements.

If Trump is the Republican nominee, there's no doubt the next few months will see the most organized, widespread character takedown in American political history.

This video includes images from Getty Images and music from MADS / CC BY 3.0.