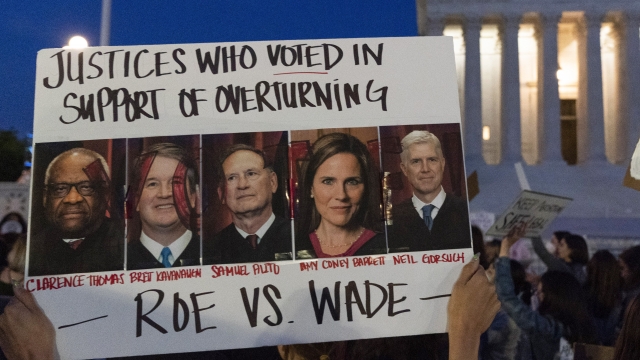 The U.S. Supreme Court's ruling to overturn Roe v. Wade essentially led the country to be made up of a patchwork of abortion laws.

Depending on where you live,  abortion laws may now be different.

The 5-4 decision by the U.S. Supreme Court to overturn Roe v. Wade sent shockwaves across the nation, as states can now establish their own laws relating to abortion care.

Some states have signed executive orders strengthening access to abortion care and protecting those who seek or perform the procedure.

"We will not aid, we will not abet in their efforts to be punitive, to fine and create fear for those that seek that support," said California Gov. Gavin Newsom.

Other states immediately restricted access or eliminated the right to abortion care altogether.

"There's just so many things that are frustrating right now that I feel are really out of my control, but if we come together, we can change things," said KellyAnn Bates, an abortion rights demonstrator.

According to the Guttmacher Institute, since Roe was overturned, at least 13 states have ended nearly all abortion services. Alabama, Arkansas, Mississippi, Missouri, Oklahoma, South Dakota and Texas have completely banned abortion with few exceptions.

In Florida, a ban on abortions after 15 weeks into a pregnancy, with exceptions if the procedure is necessary to save the woman's life, took effect July 1.

And last week, a federal appeals court in Georgia ruled the state can prohibit abortions after a fetal heartbeat is detected, which typically occurs around six weeks into a pregnancy. Ohio, South Carolina, and Tennessee are also enforcing bans after six weeks of pregnancy.

Patient care has changed, too. Abortion providers in states where access is still available reported seeing an influx of out-of-state patients.

Friday in Kentucky, a judge issued an injunction blocking enforcement of two state laws that ban almost all abortions, which means clinics can continue providing abortion care, while the legal challenge proceeds.

"It's a small sigh of relief. It bodes well for our case, and it shows that the judge has recognized the gravity of the situation and how important this care is for the people of Kentucky," said Angela Cooper of ACLU in Kentucky.

In addition to Kentucky, abortion bans in Louisiana and Utah have also been blocked in court and are awaiting hearings. Earlier this month, in what was the Democrats' first legislative response to the ruling, the House voted to restore abortion rights nationwide.

The bill has little chance of becoming law, however, with the necessary support lacking in the Senate.

In the 30 days since the ruling, reproductive health care has needed to operate in a new landscape, as well.

Doctors and prescribers across the U.S. are now seeing an increased demand for contraception, especially emergency forms.

Some national pharmacy chains are even imposing limits on purchases.