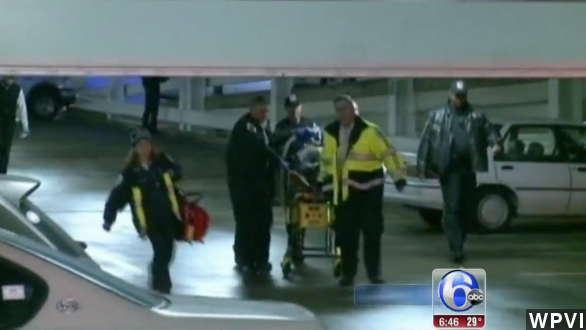 An unidentified man was shot and killed in a parking garage near a Nordstrom store Sunday night. Police are searching for two suspects.

A 30-year-old man is dead after being shot in an reported carjacking outside a shopping mall in New Jersey.

WNBC reports the shooting happened in a parking garage near a Nordstrom around 9:00 Sunday night. The man and his wife had just finished shopping during extended holiday hours at the mall.

A local county prosecutor held a news conference explaining exactly what happened after the man, who was killed, opened the passenger side door for his wife.

WPVI adds his wife was able to get away after he was shot, but is now in the hospital with unknown injuries. The unidentified victim, though, was pronounced dead at the hospital late Sunday night.

Shortly after the shooting, police say two suspects took off in the couple's 2012 Range Rover and were on the loose Monday morning. (Via WTXF)

The mall was placed on lockdown shortly after the shooting took place. Witnesses told WABC there wasn't much information about the specifics of what happened while they were kept inside.

The Star-Ledger reports authorities aren't sure why the couple was targeted.

The shooting comes just one month after shots were fired into the ceiling at another mall about 30 miles away. The lone gunman was the only person who died in that incident.