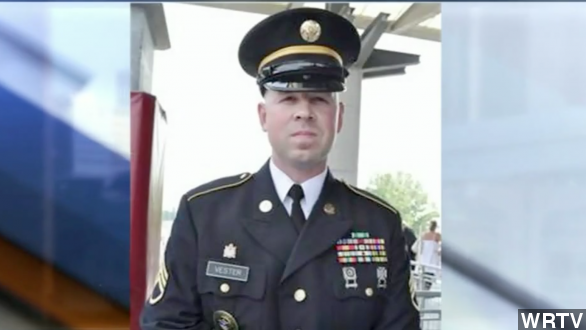 Thirty-two-year-old James Vester was reportedly on his way to buy an iPad from Craigslist when two teens allegedly killed him at a housing complex.

An Iraq war veteran on his way to close a deal for an iPad from Craigslist is expected to be laid to rest Monday after police say two teenagers robbed and killed him in Indianapolis.

Thirty-two-year-old Sgt. First Class James Vester was shot and killed last Wednesday at an apartment complex on the city's west side. Police say Vester was at the complex to buy an iPad from Craigslist but haven't said if the suspects posted the ad. (Via WRTV)

The Indianapolis Star reports the two are being held without bond on robbery and murder charges. It's not their first brush with the law. According to the paper, in 2012 a 32-year-old accused them of throwing chunks of asphalt at him, and in 2011 they were accused of threatening two 13-year-old girls with a gun.

WTHR adds five nearby schools had to be placed on lockdown after Vester was killed and the two suspects allegedly fled the scene. A family friend told the station she thinks Vester's death shows how dangerous Craigslist can be.

HILL: "I would recommend no one even using Craigslist anymore. ... There's no protection whatsoever. They can say to meet in a public place or during the day. This happened during the day — in broad daylight."

The New York Daily News reports friends have remembered Vester as a man with "a huge heart." He was reportedly going to the housing complex to buy the iPad for his parents as a Christmas gift.

Vester leaves behind his wife and a 1-year-old son.