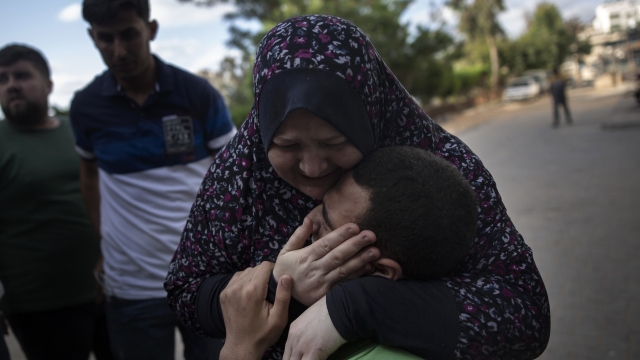 The United Nations says Israeli airstrikes have displaced over 38,000 Palestinians in Gaza and more than 2,500 people are now homeless.

Violence between Israel and Palestinian factions is unrelenting.

Israeli airstrikes have killed 198 Palestinians as of Monday night, including 58 children, according to the Palestinian ministry of health.

The AP reports rockets launched from Gaza have killed eight people in Israel, including a 5-year-old boy. Hundreds more Israelis are injured.

The number of injured Palestinians hitting a staggering 1,300, and the U.N. says six hospitals and three clinics in Gaza are partially damaged. One clinic is destroyed as ICUs fill up. Even the last remaining COVID testing site in Gaza was reportedly bombed.

These are the innocent people in the middle of a war zone. At least 2,500 Palestinians are now homeless, the U.N. reports. At least 38,000 displaced now begging for shelter at U.N.-run schools.

Meanwhile, access to even basic resources like electricity and water is limited.  Palestinians in Gaza City began this week limited to seven hours of electricity per day, at most. Sewage and solid waste now accumulating in the streets of at least three Gaza cities.

The U.N.'s humanitarian coordinator is appealing for both Israeli authorities and Palestinian armed groups to immediately allow the U.N. and its humanitarian partners to bring in aid.