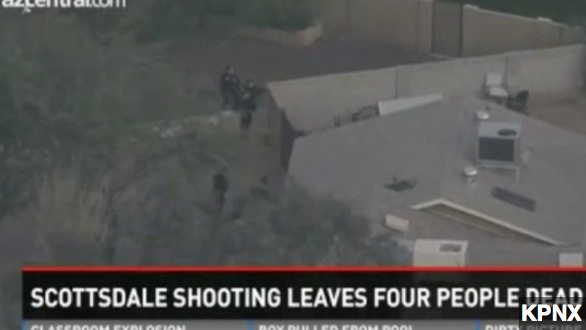 Police believe a man killed his wife, daughter, one more person and himself in Scottsdale on Tuesday.

Police believe a man killed his wife, daughter and one more person, then himself in Phoenix Tuesday.

"Detectives say they found the body of a man in the front yard. The couple's daughter was founded dead inside the home. The body of a woman was found burning in the backyard." (Via KPHO)

​Yes — burning in the backyard. Police believe a man opened fire — killing his wife, teenage daughter, and another man who was either a family friend or relative, though it is possible the woman was still alive when she was lit on fire.

​At first, the situation inside was unclear, and SWAT teams surrounded the home. A robot was sent in. After the bodies were found, the suspect's body was discovered in an alley just a flew blocks away. (Via KPNX)

KTVK reports the wife had tried to move out of the home earlier in the day, and police say the man might have been in court earlier that day. An order of protection had been filed by the woman against the man.

And police say that just a month ago, they'd been called to the home because the husband was suicidal. According to neighbors, the father was very close to his daughter. Police are calling this one of the most horrific scenes they've come upon in quite some time, and the investigation continues.