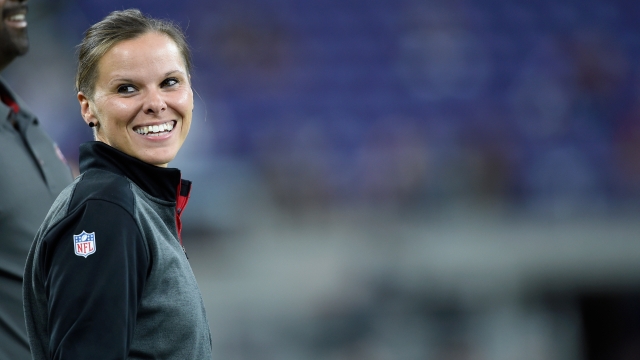 Katie Sowers, offensive assistant coach of the 49ers, will become the first woman and first openly gay person to coach in a Super Bowl.

The Super Bowl is arguably the biggest night in the professional football world. This year, the Kansas City Chiefs are making their first appearance in the Super Bowl in 50 years. They'll face off against the San Francisco 49ers, whose last Super Bowl appearance was in 2012.

While the game could be historic for a number of reasons, one person on the sidelines will be making history in her own right. Katie Sowers, offensive assistant coach of the 49ers, will be the first woman and first openly gay person to coach during a Super Bowl game.

Sowers got her start with the 49ers as a 2017 Bill Walsh Minority Fellow and has been with the team since then. The fellowship was created to increase the number of full-time minority NFL coaches in the league, and during her tenure she's been open about her desire to break barriers for women in the NFL.

Sowers' role in the NFL has been years in the making. She began playing football as a child and went on to play professionally for the 2013 United States Women's National Football Team. Last year, she landed a feature in a Microsoft ad that celebrated her presence in the NFL.

"I'm not just here to be the token female. I'm here to help us win."

Sowers is one of a small but growing group of women taking on leadership positions in major sports leagues. When she was promoted to offensive assistant coach, she became just the second woman to ever hold a full-time coaching position in the NFL. There are currently 11 women in coaching positions in the NBA, and the San Francisco Giants just hired the first woman full-time assistant coach in Major League Baseball.

In a tweet posted before the Super Bowl matchup was set, Sowers said: "If your daughter has a dream of being a football coach in the NFL... or a ballerina... or a professional soccer player.. or a teacher.. or a nurse.. or a doctor.. or an astronaut.. or even PRESIDENT.. just let her know this... She. Can. Do. It. And she will change the world."

Super Bowl LIV will take place in Miami on Feb. 2.