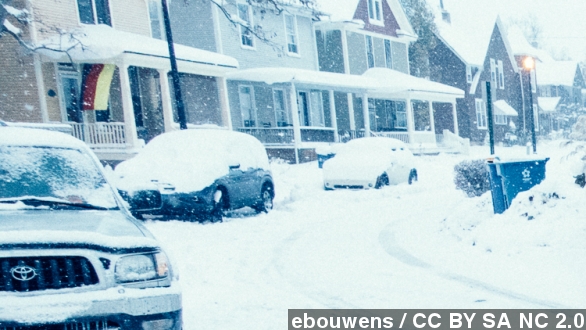 The storm has dropped about six feet of snow in the area at a rate of five inches per hour.

New York officials say five people have been killed amid the intense snowstorms pummeling the city of Buffalo.

According to CNN, local officials say three people died from heart attacks while shoveling snow, one person was killed in an automobile accident and county officials in Buffalo announced a fifth death early Wednesday morning.

BUFFALO MAYOR BYRON BROWN VIA WGRZ: "Putting people on stretchers and hiking back out to get them the medical attention that they need. ... This is a very serious storm."

Buffalo's mayor added the storm is "probably heavier than anything that [Buffalo has] seen in over 40 years."

And while cold fronts have stretched across the U.S. and dumped snow on northern states recently, Buffalo has been one of the hardest cities hit. (Video via WIVB)

Forecasters say lake-effect snow — seen in this time lapse video — helped dump more than six feet of snow on some parts of the city with more wintry weather on the way. As of Tuesday night:

NBC: "Falling four to five inches per hour. ... There's more snow on the lakefront than there is just five miles inland. National Guard is being called in to help."

WHEC also says a portion of the New York State Thruway was shut down in western parts of the state, leaving hundreds of vehicles stranded. Authorities plan on using snowmobiles to check on people who are trapped.

New York Governor Andrew Cuomo also declared a state of emergency Tuesday for several counties in the state. He urged residents to "exercise extreme caution ... and stay off the roads until conditions are clearer and safer."

Altogether, CNN says by Friday, areas south of Buffalo could be covered with up to 70 inches of snowfall since the storms hit.