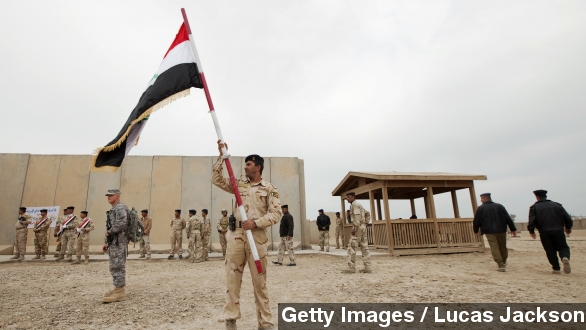 An official investigation by the Iraqi government into its military found some 50,000 made-up soldiers on the military's payroll.

In an announcement Sunday, Iraq's prime minister said corrupt officers were most often the culprits, putting imaginary soldiers on the payroll so they could pocket the extra money. (Video via Iraq Ministry of Defense)

Prime Minister Haider al-Abadi said, "I'm sad we paid the salaries during this period, all these salaries, as Iraq doesn't have the money. While our soldiers were fighting, and some have been killed, these are people who received salaries and are not present on the ground and that has been allowed to happen."

Since taking office in September, Prime Minister Haider al-Abadi has focused on cutting back on corruption and nepotism that appears to happen throughout the Iraqi government. (Video via The White House)

The Washington Post reports Abadi's announcement before parliament drew applause and noted, "Abadi has retired dozens of officers who served under Maliki, who has been widely accused of promoting officers based on loyalty rather than merit."

This news comes at a time when the Iraqi military is one of the most important opponents of ISIS, which has made big territorial gains in Iraq.

The Iraqi military drew scrutiny over the summer when it suffered high-profile defeats at the hands of the terror group, with multiple reports of Iraqi soldiers fleeing. (Video via CBS)

Iraq's struggles with corruption are well-documented, with one Iraqi commander telling NBC back in June, corruption is the biggest threat to Iraq — moreso than terrorism.

The U.S. has pledged to give just over one and a half billion dollars to help train Iraqi and Kurdish forces in the fight against ISIS.