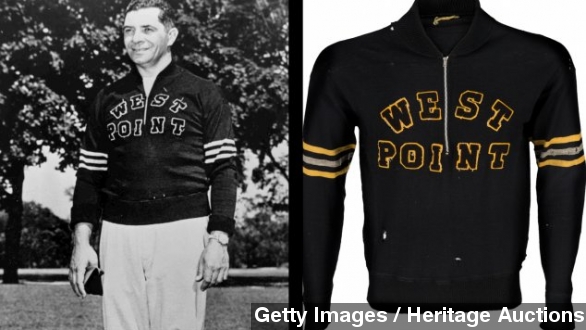 A Tennessee couple bought a West Point sweater at a thrift store in North Carolina. At the time, they didn't know it once belonged to Lombardi.

We're sure you've heard tons about Vince Lombardi in the past couple of weeks. The legendary NFL coach's name is attached to the Vince Lombardi Trophy — aka the Super Bowl trophy.

But take a look at the coach here. Check out that West Point sweater.

Now, take a look at this sweater.

That second picture is from a Tennessee couple that unknowingly purchased Lombardi's sweater at a North Carolina Goodwill for just 58 cents.

"I was watching a Vince Lombardi documentary, and I said: 'We have a sweater that's just like that. Wouldn't it be great if it was actually Vince Lombardi's?'" Sean McEvoy told WGHP.

That's when Sean McEvoy's wife checked the tag inside the sweater — "Lombardi 46" written right on it.

The sweater is now up for auction, and one appraiser says it could fetch up to $20,000.

​The sweater likely belonged to Lombardi when he started coaching at West Point in 1948. He was hired as an assistant coach for the team's offensive line.

And from there? Well, the rest is history. Lombardi went into the NFL and won five total championships — three NFL Championships and two Super Bowl championships — in nine seasons as a head coach with the Green Bay Packers. He owns the highest playoff win percentage of a coach of all time (.900) and was inducted into the Pro Football Hall of Fame in 1971.

The sweater will go up for auction Feb. 21.