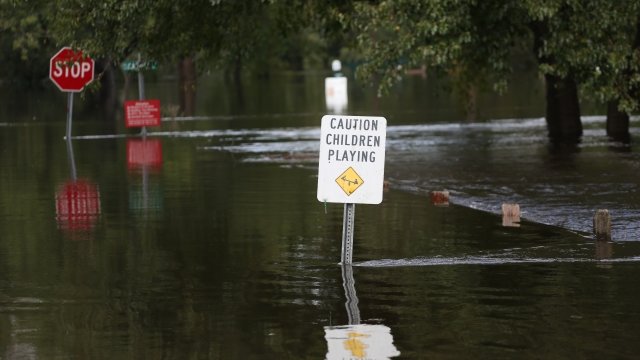 North Carolina, which is the second-largest producer of pork in the nation, has been drenched with rain from the storm, causing pollution concerns.

Hurricane Florence brought a record amount of rainfall to North Carolina over the past week. Even though the rain has subsided, the resulting flooding remains a serious risk.

Several rivers across the state are expected to crest this weekend, even as communities are already struggling with heavy floods.

“If you ain’t got a boat, you don’t need to live down here. How about I just put it that way. Simple," said Mitchell Townsend, a resident of Vanceboro, N.C.

In towns like Kinston that sit along the Neuse River, the flooding poses more than just a safety risk. It could be a health hazard, too.

“Because of all the hog farming and the other types of agriculture, especially in the Neuse River watershed here, we’re going to be looking for signatures of agriculture," said Lee Ferguson, associate professor of environmental chemistry at Duke University. "For example, things like pesticides, herbicides, as well as things like antibiotics and other kinds of contaminants that might be associated with hog farming and other kinds of intensive agriculture.”

North Carolina is the second-largest pork producer in the US, with many hog farms located in the eastern region. While the Tar Heel state is no stranger to hurricanes, researchers say this storm brought new concerns with it.

“Something different about Florence is that it actually sat here and drenched the state for a long period of time. And it’s really become more of a flooding story than it is a wind story. And things like rising rivers, like the Neuse behind us here, can flood businesses and homes and also those flood waters can inundate areas like towns that have potential pollution sources associated with them. That’s what’s actually different from an environmental standpoint about this hurricane rather than others is the risk for pollutants to enter flooding of populated areas.”