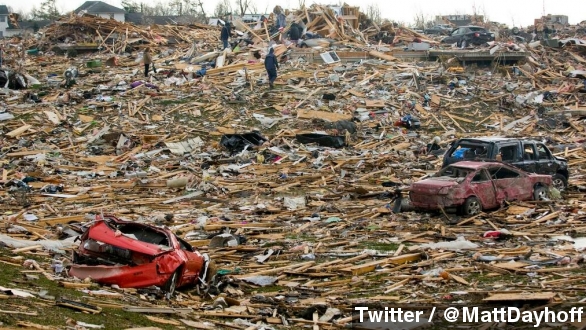 An outburst of at least 80 tornadoes left six people dead in Illinois and many more injured.

According to The National Weather Service, more than 80 tornadoes touched down in all through the Midwest — 10 in Illinois alone. CNN is reporting all six fatalities were in Illinois — the state hit the hardest.

The National Weather Service confirmed that an EF-4 Tornado touched down in the city of Washington, Illinois. Winds inside the tornado were between 150 and 200 miles per hour.

The fast-moving low pressure system came down from Canada — a perfect storm of events. A cold air mass from the North met unseasonably warm temperatures already in place — fueling the system.

nAlmost the entire Midwest was under some sort of watch or warning Sunday. Reports of wind damage spread from Missouri to eastern Pennsylvania.

In total the National Weather Service says there were:

Pictures of the devastation flooded Twitter — some of them are jaw-dropping.

If you'd like to donate to the victims, visit redcross.org.