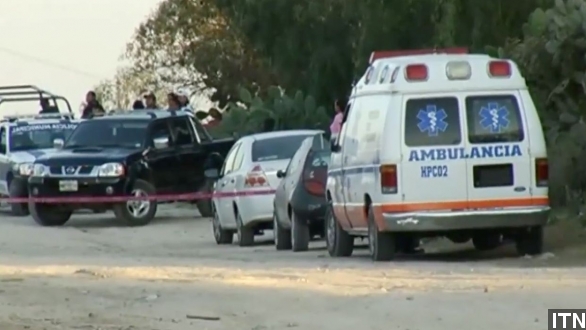 Six people in Mexico are hospitalized with symptoms of radiation exposure days after thieves stole a truck carrying radioactive material.

​Six people in Mexico are being treated for symptoms associated with exposure to radioactivity. It comes just one day after Mexican authorities recovered radioactive material they say thieves encountered when they stole a truck.

Authorities near Mexico City were on high alert Monday after they learned about the theft. The truck was carrying the highly radioactive cobalt-60 from a hospital to a nuclear waste dump. (Via KCPQ)

The U.S. Department of Homeland Security also intervened. Considering Mexico's instability in handling its dangerous drug cartels, it was suspected at one point that the material could be used to make a dirty bomb. (Via ITN)

But their concerns were allayed, for the most part, after authorities recovered all the material about 25 miles from the truck.

Clean-up crews set up a 500-meter perimeter around the material, even though only about 40 grams of cobalt-60 were in the stolen capsule. So far no residents in the nearby town have tested positive for radiation. (Via BBC)

That's when the International Atomic Energy Agency announced that the people involved in the theft likely made a fatal mistake.

Although cobalt-60 is a primary ingredient in combating brain cancer, if one were to make direct contact with the metal for just minutes, it could mean extremely dangerous radioactive poisoning. (Via Fox News)

Now, federal police are blocking off a central Mexico hospital where they say five adults and one teenager have been admitted after potential radioactive exposure. (Via New York Daily News)

It's similar to an incident that occurred in Thailand in 2000. Citizens rummaging through a scrap pile found cobalt-60 and handled it for just a short period of time. Several people died, and others had radiation burns.

The Washington Post writes: "There are parallels between what happened in Thailand and what's happening in Mexico. Both are developing countries, lots of poverty, desperate people. … Maybe there are gaps in regulation and enforcement coverage."

Although little is known about the condition of the six admitted to the hospital, one official said only one of the six was dizzy and vomiting.