7,000 Airstrikes And Counting: The ISIS Fight In Numbers 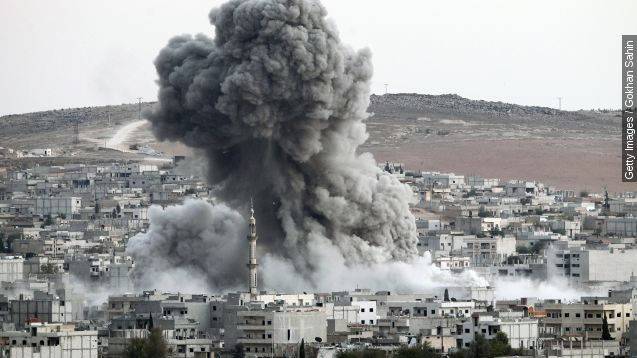 Of the 7,000 airstrikes launched against ISIS targets in Syria and Iraq, American warplanes have done the bulk of the work.

The U.S. air campaign against ISIS: in numbers.

What started as a limited operation just over a year ago has since expanded to include a host of bases and hundreds of U.S. troops.

As of Sept. 22, the U.S. and its allies have launched over 7,000 airstrikes against ISIS targets in Iraq and Syria.

The Obama administration likes to hype up that there are over 60 nations involved in the fight:  "America will be joined by a broad coalition of partners," the president said.

But when you look at the numbers, it's clear the U.S. is doing most of the work, especially in Syria — where American warplanes and ship-based Tomahawk cruise missiles have pounded not only ISIS, but also the Al-Qaeda-linked Khorasan Group and Nusra Front.

By far the biggest chunk of that goes to the Air Force, where the cost of bombing raids, surveillance and other activities runs about $6.5 million daily.

So, it's expensive, but is it working? To date, the coalition has destroyed a little over 10,000 targets — ranging from tanks and fighting positions to oil infrastructure.

In June, the U.S. said the coalition has killed as many as 10,000 ISIS fighters. But in war, rarely do body counts provide a complete picture.

Because in the face of airstrikes, ISIS, it seems, is here to stay.