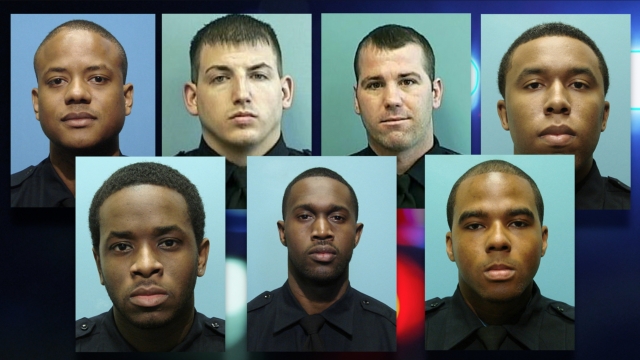 The Baltimore Police Department arrested seven of its own after they were indicted on federal racketeering and conspiracy charges.

Seven Baltimore police officers could get up to 20 years behind bars over charges of robbery, extortion, fraud and more.

"These seven police officers acted disgracefully. They betrayed the trust that we have and are trying to build upon with our community," Baltimore Police Commissioner Kevin Davis said.

Investigators say the officers worked together to file fraudulent overtime sheets, making off with nearly $400,000 — and that's only in the last fiscal year.

The U.S. Justice Department report lists concerns about use of force, investigations of sexual assault and civil rights violations.

On top of that, the officers were indicted for allegedly filing false police reports, taking cash from innocent civilians, and even turning off their body cameras to avoid oversight.

All seven officers — one sergeant and six detectives — were assigned at one point to the same unit, Baltimore's Gun Trace Task Force.

Each of the officers was indicted on federal racketeering charges. One was believed to be involved with an illegal drug ring.

And this isn't the first time some of the officers were on the wrong side of the law. The Baltimore Sun reports the city had paid more than $500,000 to settle court cases involving members of the group.