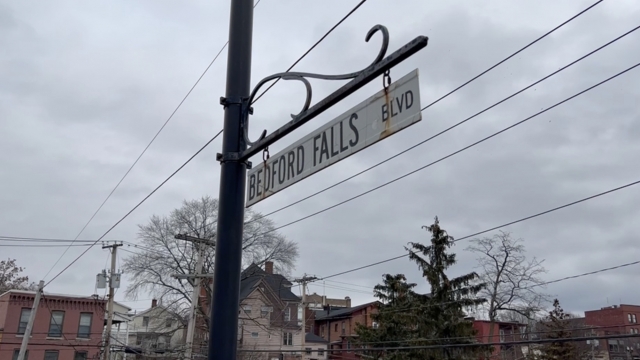 A festival in New York featured appearances by six original cast members, a groundbreaking for expansion of the museum and several bell ringings.

Written and directed by Frank Capra, "It's a Wonderful Life" is a Christmastime classic about a downtrodden man named George Bailey who, on Christmas Eve, wonders what would happen if he were never born. This year, fans and original cast members are celebrating the beloved film's 75th anniversary.

Bedford Falls was the inspiration for the fictional town of Seneca Falls in upstate New York.

Every year, the town organizes a festival in honor of the film — re-creating the town of Bedford Falls and revisiting with original cast members like Karolyn Grimes, who played Zuzu Bailey, and Jimmy Hawkins, who played Tommy Bailey.

"People come and enjoy the meanings from the movie," Grimes said. "Everybody has a united feeling. And it's just wonderful. I look forward to this every year."

"We're the last men standing, and we believe in Capra's message. So we carried on," Hawkins said.

In celebration of the 75th anniversary, the festival featured appearances by six original cast members, as well as a restoration of George Bailey's car, a groundbreaking for the expansion of the "It's A Wonderful Life" museum, and several bell ringings to honor the spirit of community and impactful individuals.

"The film is about love at the end of the day," festival attendee Brett Ferry said. "I think the sentiment is amazing, and one day I wanted to see [Seneca Falls] for myself."

Grimes said: "It gives you an opportunity, when you watch this movie, to sit down and look at your own life. And you know, you have made differences."

"It's A Wonderful Life" has resonated with audiences all over the world since 1946 — and longtime fans say it's because of the film's lessons on community, charity and the message that no man is a failure who has friends.