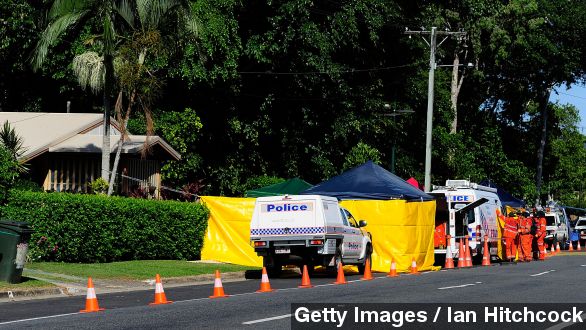 Australia police say eight children between the ages of 18 months and 15 years were found dead at a house in Cairns suburb Friday.

Some tragic news out of Australia Friday. Eight children have reportedly been found dead, and one woman was injured at a house in a suburb of Cairns.

Details are scarce, but police say the children were between the ages of 18 months and 15 years, while a 34-year-old woman, who is believed to be the mother of seven of the kids, was taken to a hospital and is in stable condition. (Video via Sky News)

Multiple Australian media outlets are saying the deaths are the result of a mass stabbing but authorities have not confirmed that.

Australian police say they responded to a call Friday morning after receiving reports that the woman had been injured. Officials have not named any suspects, and the crime scene is now on lock down while authorities launch an investigation. (Video via CNN / 7News)

"There's no need for the public to be concerned other than that's it's a tragic, tragic event. ... The situational is well-controlled at the moment. ... As we progress further we'll be sharing the results of the investigation," said Cairns Detective Inspector Bruno Asnicar.

Prime Minister Tony Abbott expressed remorse, saying the events were "heartbreaking" and "gut-wrenching" and he called it an "unspeakable crime."

The deaths come just days after another distressing event in Australia, when two hostages were killed after a gunman seized a popular cafe in Sydney.

None of the victims in Friday's deadly event have been named. There's a candlelight vigil planned for Friday evening.