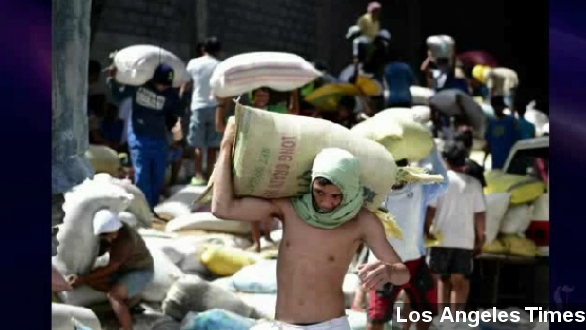 Eight people are dead after thousands of survivors of the devastating Typhoon Haiyan reportedly stormed and looted a rice factory in the Philippines.

Eight people are dead after thousands of survivors of the devastating Typhoon Haiyan reportedly stormed and raided a rice factory in the Philippines.

​Officials say the storm survivors were crushed to death Tuesday when a wall in the factory collapsed during the incident. (Via Los Angeles Times)

Police and soldiers were reportedly helpless in the face of the thousands who swarmed the building. A spokesperson for the National Food Authority says tens of thousands of sacks of rice were stolen during the incident. (Via The Independent)

Even though aid is slowly starting to make its way to the survivors displaced by Typhoon Haiyan, many are still without basic necessities, and looting has become a huge problem in areas hit hard by the storm.

A severe lack of food and water in these areas has led to survivors ravaging grocery and department stores. Some have even begun digging up water pipes to try and find water. (Via New England Cable News)

One survivor got his family to safety before the storm hit, but their supplies are running out.

"They have enough baby formula to last just four more days. He says only God is giving him the strength to carry on." (Via BBC)

"I have heard the complaints from people, and I agree with them. You can't have people who are here who are desperate and can't get anything to eat and don't have water." (Via Channel 4)

And on top of that, many survivors are still searching for their loved ones in the devastation the super typhoon left behind. (Via WVUE)

The death toll is now understood to be much lower than an early estimate of 10,000 from two officials on the ground. The president of the Philippines announced it will probably amount to between 2,000 and 2,500 total. (Via ITN)

According to the UN, Haiyan has affected 9.5 million people across the Philippines and has displaced nearly 600,000 since it began on Nov. 8.