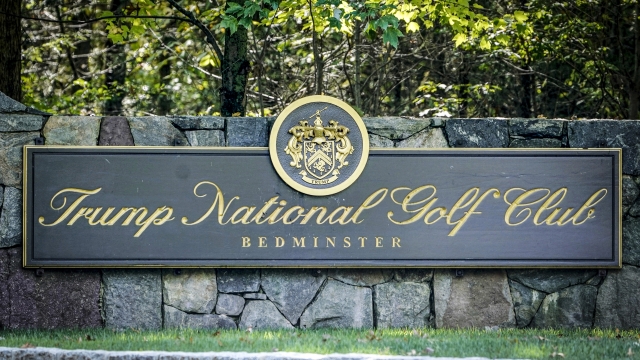 Golfers from the controversial Saudi-funded LIV golf league are set to tee off Friday at the Trump National Golf Club in Bedminster, New Jersey. But just down the street 9/11 families are still reeling from the former president's decision to host it.

Matthew Bocchi grew up just 15 minutes from Trump's club. He lost his father on September 11 at nine years old, making him one of 1,000 children from New Jersey to lose a parent. More than 750 people from the state died that day.

"For something like this to be occurring here is like a slap in the face. I think that it's like you can't even escape it. We have to deal with it in this area. We're constantly reminded of who we lost," Bocchi said.

Bocchi is just one of the many 9/11 families outraged not only that the tournament is taking place in New Jersey, but that Americans are joining the league. Big names including Phil Mickelson, Dustin Johnson and Bryson DeChambeau have all reportedly accepted contracts worth tens of millions of dollars.

Players on the LIV tour said last month their decision to join the new league was driven by higher money and not politics.

"Everybody is entitled to their own opinions, and from my perspective, we're golfers. We're providing entertainment globally, and we'll continue to do so as time goes on," DeChambeau said.

"For us to sit here and accept that numerous well-known golfers can so easily accept blood money from the Saudi royal family is what hurts the most today," Bocchi said.

The former president is picking up this tournament after he lost arguably the most coveted one. The PGA pulled the championship out of Bedminster after January 6. In turn, Trump is now urging golfers to jump ship and join the Saudi league.

"We're very disappointed in him. We don't like it. He should know better. He knows better than anybody," said Terry Strada, whose husband was killed on 9/11.

But their outrage isn't just with the former president; it's with the current one, too. President Biden traveled to Saudi Arabia just two weeks ago, where 15 of the 19 hijackers were from, and made no mention of the country's responsibility for the terror attacks.

"President Biden needs to right the wrongs he recently committed by omitting 9/11 accountability, from his recent meeting with the crown prince," Strada said.

In a win for the families, he did, however, declassify documents that they say prove that the Saudi government gave the green light to the terror attacks.

"The perpetrators and financial backers of the attacks on our country on September 11, 2001 that killed our loved ones left us all grappling with incomprehensible loss, and deep psychological and emotional wounds that continue to haunt us today," said Alison Crowther, who lost her son on 9/11.

They say that's all the more reason LIV golf and their players cannot be ignored.

"You have become mouthpieces for the kingdom, and perfect examples of how sport washing works to erase the sins of the guilty nation. If you erase the truths about the kingdom's culpability in 9/11, what lessons are you purging for a generation who wasn't alive when their country was attacked? Is teaching our youth that blood money in the hundreds of millions is more important than values integrity, hard work, and the safety and security of our of our sovereign state, really what you want your legacy to be?," Strada said.

20 players have now defected from the PGA Tour, with Patrick Reed the latest former Masters champion confirmed on Saturday as signing up to LIV Golf.