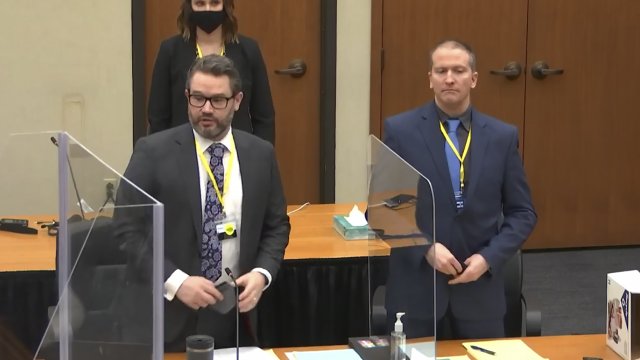 Six men and three women are seated for the trial.

Jury selection is moving along on day five in the trial of Derek Chauvin. Two more jurors were added to the mix, bringing the number up to nine out of the 14 jurors needed before opening statements in this trial, which began on March 29.

But first thing this morning, the attorneys again argued motions in front of the judge and the defense making a key motion trying to continue this case based on the massive pretrial publicity garnered after the historic settlement handed down on Friday between the city of Minneapolis and the family of George Floyd.

We're talking about that $27 million civil pre-trial settlement on Friday. In fact, one of the prospective jurors this morning even mentioning that since she heard that news, she could not be fair and impartial. She was struck for cause but since then, we've added two more jurors to the mix, bringing the total number up to six men and three women.

Also outside the Hennepin County courthouse was a small gathering of protesters blocking off the street right in front of the main secured entrance of the courthouse.

We haven't seen many out and about since day one of this trial last week, but today, more of a presence with protesters blocking roads, marching and chanting all advocating for justice in this trial and for fair and impartial jurors.