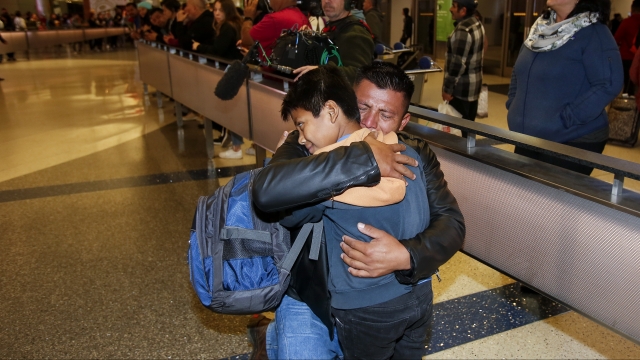 The parents are returning for another shot at asylum, after a judge found they were misled by border patrol agents when they first arrived.

Nine migrant parents who were deported a year and a half got the chance to reunite with their children late Wednesday night, after a federal judge ruled their separation and deportation was unlawful.

The parents flew from Guatemala City to Los Angeles International Airport, where some of the children waited to greet them.

Federal Judge Dana Sabraw ruled in September that these parents' deportations were unlawful because the U.S. government didn't allow them to pursue asylum. The judge found border agents tricked the migrants into dropping their claims by having them sign forms they didn't understand or misinforming them about asylum law.

He ordered officials to allow almost a dozen misled migrant parents to come back to the U.S. so they could have a fair chance at asylum. Other parents, who were not found to have been coerced, have to decide whether to have their children return to their home countries or remain in the U.S. without them.