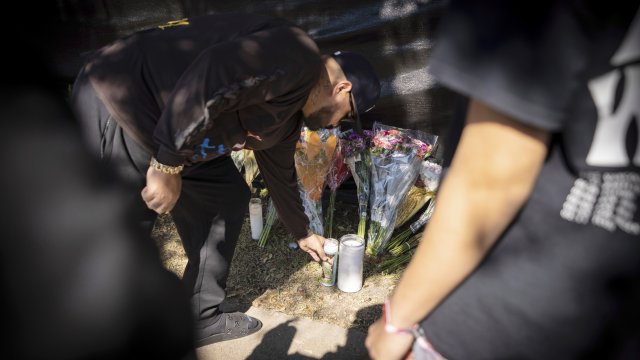 The child was on his father's shoulders when the crowd surge began and fell off when his father passed out.

A 9-year-old boy injured at the Astroworld festival is now in a medically induced coma.

The boy's grandfather tells CNN that he went to see his favorite artist, Travis Scott, with his father.

Ezra Blount was on his father's shoulders when the crowd surge began. His father passed out, and Ezra fell off his shoulders into the crowd.

By the time the boy's father came to, Ezra had already been transported to a hospital.

His grandpa says the boy suffered cardiac arrest because he already has a damaged heart, and he also suffered damage to his brain and liver after being trampled.

More than a dozen people are still hospitalized after the Friday concert where eight people died.

Scott says he will pay for the funerals of the victims and will pay for mental health treatment for anyone who was at the show.

He also said he'll offer refunds to everyone who was there.

Officials say a crowd surged toward the stage, making it hard for people to breathe and causing them to pass out.

And for the first time since the deaths, Drake is speaking out.

He was a surprise guest during the concert, and witnesses say that's when things got especially rowdy.

Drake said in a statement: "My heart is broken for the families and friends of those who lost their lives."

He says he'll be of service in any way that he can.

Drake and Scott have been named in lawsuits filed by concertgoers.