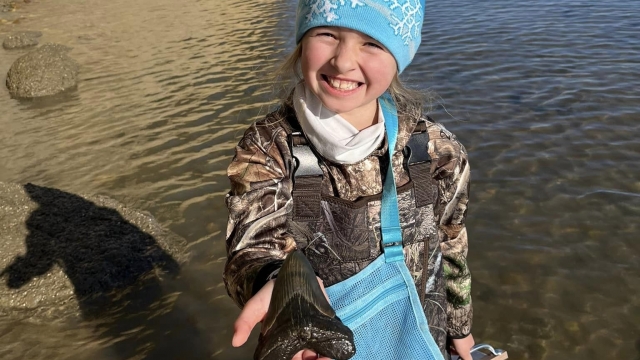 Molly Sampson got the Christmas gift of her dreams. The 9-year-old from Maryland wants to be a paleontologist, and she has a special interest in megalodon, the largest shark ever to have lived. And while they have been extinct for millions of years, people still come across fossils of the sharks' massive teeth.

When Molly and her big sister Natalie got the insulated waders and fossil sifters they'd put on their Christmas lists, the first thing they wanted to do was go shark tooth hunting.

"The only thing Molly really wanted for Christmas was insulated chest waders because she knew she was missing out on some good fossil finds further out in the water," Molly's mom, Alicia Sampson, told CBS News. "As soon as they finished breakfast, they got their waders on as quick as they could and headed to the cliffs with my husband, Bruce."

So, at around 9:30 in the morning, they made their way into the freezing water at Maryland's Calvert Cliffs State Park, which is known for its fossils. Since it was low tide and they had their waders on, the family was able to go further out than usual. The father and daughters made several finds, but in less than 30 minutes, Molly spotted something fascinating. Molly's mom shared photos on Facebook.

"Look at the size of the tooth Molly just found," Alicia Sampson wrote in the Facebook post. "This tooth was in the water, so thanks to the waders she got the best part of her present!!"

One of the photos she shared shows the massive megalodon tooth in the top left corner, dwarfing the other shark's teeth the family found.

"I went closer, and in my head, I was like, 'Oh, my, that is the biggest tooth I've ever seen!'" Molly told NPR. "I reached in and grabbed it, and dad said I was shrieking."

Stephen Godfrey, curator of paleontology at the Calvert Marine Museum, told NPR the tooth is one of the largest probably ever found in the area, calling it a "once-in-a-lifetime kind of find."

We wonder what Molly will ask for next Christmas!