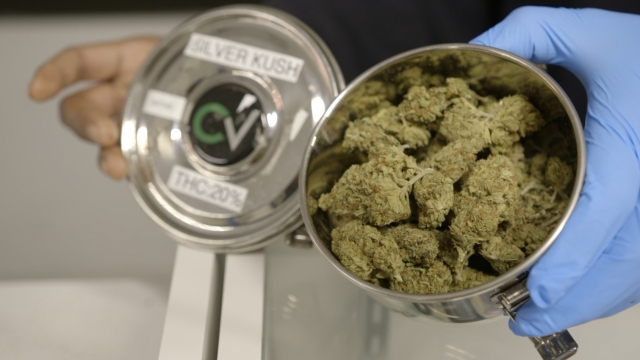 Most banks won't work with legal weed businesses as long as marijuana is still federally illegal. Congress could soon fix that.

Starting a new business isn't easy, but when you can't get a loan from a bank, open a business account or even use credit cards, it can be almost impossible.

But that's the current landscape in the cannabis industry: most banks won't work with marijuana-related businesses because weed is still federally illegal.

For dispensaries like Herbal Alternatives in Washington, D.C., where medical marijuana is legal and recreational use has been decriminalized, that means no access to some of the basic banking tools.

"What I tell people when they do want to get into this business, the first thing you have to have; a lot, a lot of capital behind you. Don’t expect the banks to be able to give you loans because you need to get 20 pounds of flower," said Frankie Amitrano, the floor manager at Herbal Alternatives.

"I think one of the biggest difficulties that a lot people see across the board is the inability to use credit cards," Amitrano said. "That comes not only from a dispensary standpoint —how we pay our cultivators, pay our bills, things like that…. And then once those patients do come in to a dispensary, how are they able to pay for their medicine for their product?"

So, most marijuana businesses have to operate on a cash-only basis, making them a prime target for thieves.

"You do have to get, more high tech, more indestructible safe situations. The buildout of our location is extremely safe with bulletproof glass, and heavy doors and a guard downstairs at the door. Other locations will have armed guards. ... So it’s just all these other added costs on top of your licenses, your products," Amitrano said.

But Congress has a solution in the works. The House Financial Services Committee has approved the SAFE Banking Act, a bill that would allow banks to legally work with the cannabis industry and related businesses. The bill could soon make it to the House floor for a vote, where it has strong bipartisan support.

But the bill's fate in the GOP-controlled Senate is uncertain. Senate Majority Leader Mitch McConnell has repeatedly blocked marijuana reform legislation, including measures that would open up banking systems for cannabis businesses.

Critics worry that opening up the banking system to the cannabis industry while the legal waters around weed are still muddy, could just create more chaos and confusion.

"As far as I know, the House Financial Services committee does not have jurisdiction over de-scheduling a drug and in my opinion we are putting the cart before the horse by addressing this issue here in the Consumer Protection and Financial Institutions subcommittee before the drug is de-scheduled," said Rep. Blaine Luetkemeyer, the ranking member on the committee.

An earlier version of this report said 600 dispensaries in Denver had been robbed within the first three years after Colorado legalized recreational weed. This story has been updated.