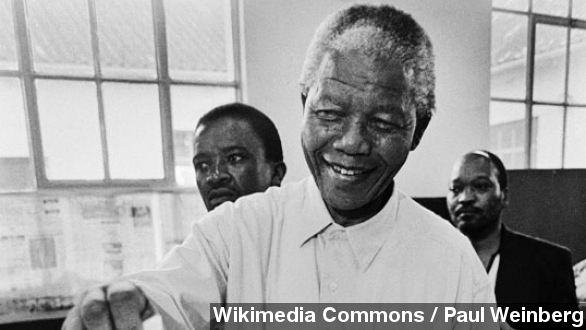 For those who aren't familiar with the South African leader, here's a quick explanation of how he became a symbol of the fight against oppression.

When Nelson Mandela passed away on Thursday at the age of 95, he left behind a lifetime of historic achievements. Here's a look back on the defining moments of the Mandela's life, from civil rights campaigner to South Africa's first black president.

Mandela was born on June 18, 1918 in Mvezo. After the death of his father, the 9-year-old Mandela was taken in by a tribal regent and given an education, with the expectation he would one day become a tribal leader. (Via SABC)

As apartheid laws and policies took hold in South Africa, Mandela began to take a leadership role in the African National Congress, an organization committed to fighting the racial oppression of apartheid. For 20 years, Mandela directed nonviolent campaigns including strikes, sit-ins, stay-at-homes, and demonstrations against apartheid. (Via South African History Online)

Despite his nonviolent commitment, the South African government branded Mandela a security threat and tried to imprison him for treason in 1955. In 1961, during his first televised interview with ITN, Mandela told the world his patience was wearing thin.

"I think the time has come for us to consider, in the light of our experiences in the stay-at-home, whether the methods we have applied so far are adequate." (Via  ITN)

Shortly afterward, Mandela organized a militant wing of the ANC and helped orchestrate a string of bombings targeting government institutions. In 1962 Mandela was put on trial for treason, and he was eventually sentenced to life in prison. (Via Al Jazeera)

The next 27 years of Mandela's life would be spent behind bars. He was initially incarcerated at the now-infamous Robben Island prison, where the civil rights leader developed tuberculosis and lung problems after years of hard labor. (Via Flickr / Carolina Odman, Wikimedia Commons / Rudiger Wolk)

The fight against apartheid intensified during Mandela's imprisonment, and he soon became a national symbol of the anti-apartheid movement. The South African government faced increasing international pressure to free Mandela.

And finally, the government gave in. On February 11, 1990, Nelson Mandela was released from prison and walked the streets of South Africa a free man. (Via CNN)

"Let each one of you and all of our people give the enemies of peace and liberty no space to take us back to the dark hell of apartheid." (Via ABC)

Mandela was elected president of the ANC the following year, and helped negotiate for multiracial elections with the government.

When the ANC was finally allowed to participate in the country's political process, Mandela was the obvious choice for a presidential contender. In 1994, Mandela cast the first vote of his life. It was for himself — and he won in a landslide. (Via CBS)

Mandela served one five-year term as South Africa's president, during which he worked to reform the country's constitution and end apartheid. He announced his retirement from politics in 1999.

Despite his retirement, Mandela's activism continued unabated. He focused on combating the HIV/AIDS epidemics sweeping through Africa, and funded several charitable foundations. He made his last public appearance at South Africa's World Cup in 2010. (Via BBC)

Mandela's story of overcoming oppression continues to inspire civil rights activists today, and he remains a symbol of national unity to the people of South Africa.