A Closer Look At The Anti-Vaccination Debate 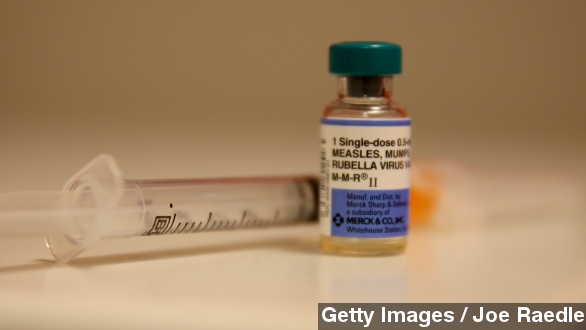 Here's a look at some of the back and forth between the medical community and vaccine-skeptical parents.

Vaccines are all over the headlines this week, but there's been a back and forth between the medical community and vaccine-skeptical parents for well over a decade. Here are some of the high points to get you caught up.

In 1998, a now-famous study in the journal The Lancet claimed to have discovered a link between the measles, mumps and rubella vaccine and developmental disorders like autism.

"Without a doubt in my mind, I believe vaccinations triggered Evan's autism," Jenny McCarthy said.

The study lead to a campaign, made famous by celebrities like Jenny McCarthy, which lead to a drop in childhood vaccinations that continues today, even though the '98 study was quickly discredited.

Other controversies have surrounded the preservatives used in vaccines — specifically, mercury-based preservatives that were used for most of the 20th century and were also blamed for causing developmental disorders.

The medical community also says there's no evidence for those claims, although in 2001 the FDA stopped issuing licenses for vaccines that contain mercury for children under six as a precaution.

The only exception is the flu shot, which still contains small amounts of mercury.

Vaccines are expensive because of the research and distribution involved but are by no means a big money-maker for doctors when labor, office needs and vaccine costs are considered.

A study published in Pediatrics in 2009 found a third of doctors actually lose money by vaccinating their patients.

The current measles outbreak is a good example of how diseases, once thought to no longer be a problem, can make a comeback.

Although the measles was eradicated in the U.S. in 2000, we have seen several outbreaks since then because travelers can carry it into the country.

Over all, the medical community says vaccines are safe and have been key in combating infectious disease.

But safety is only one part of the vaccine debate. There's also the political side: whether vaccines should be mandatory or whether parents should be able to choose not to vaccinate.