Living In Limbo: A DACA Recipient Talks Living On The Texas Border 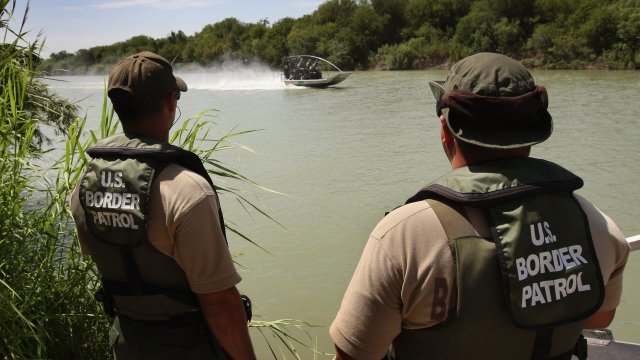 Ana Contreras lives in Laredo, Texas — a border town along the Rio Grande with two border patrol stations in the city.

"My life before DACA was a life of anguish. A life of fear. I feared for my life, I feared for my future, for my kids' future. ... I remember dreaming of me being in Mexico being deported to Mexico and all I can do is see my kids on the side. And not be able to get to them. ... I could just see them waving at me, but I couldn't get to them," DACA recipient Ana Contreras said.

The Deferred Action for Childhood Arrivals, or DACA, immigration policy was established in June 2012. Since that time, it's shielded nearly 790,000 young undocumented immigrants from deportation.

"I'm here today to announce that the program known as DACA that was effectuated under the Obama administration is being rescinded," U.S. Attorney General Jeff Sessions said.

But, at least for the moment, that program is in jeopardy, along with thousands of men, women and children across the U.S.

"My name is Ana Karen Contreras. I am 28 years old. I'm an internal accountant for Davaligne Inc in Laredo, Texas. … And I was brought into the U.S. at 4 months of age." Contreras is one of the many "Dreamers" who has built a life in America without being an American citizen.

Newsy's Jamal Andress asked, "Have you ever talked with your mom about why she decided to come to Laredo?"

"Mexico had nothing to offer our family, so, you know, she brought us over here thinking that she could give us a better life," Contreras responded. "And honestly, now that I am a parent myself, now that I'm a mother — I mean what parent wouldn't want to give their child the best life that they could, the best future that they could?"

Contreras lives in Laredo — a border town along the Rio Grande in southwest Texas. Laredo, Texas, borders Laredo Nuevo, Tamaulipas, in Mexico. Being so close to the border, Laredo has not one but two border patrol stations in the city and multiple border patrol traffic checkpoints.

"So living in a border town, it's very different. … I mean anywhere you turn there's border patrol so the risk, the fear of getting caught or being seen by them is tremendous. … So I mean growing up before DACA was really hard because you have that fear always, it never leaves your sight," Contreras said.

"They are Americans in their hearts, in their minds, in every single way but one … on paper," President Obama said.

JA: "Do you remember where you were when DACA was announced and your reaction to it?"

AC: "Yes, I remember I was at the university. I was here at the university and I thought to myself, 'Wow, this is our fighting chance. … I finally get to come out of the shadows. I get to work. I get to apply like anybody else in this country, and I get to have a good job. I have rights.'"

DACA's legality has been questioned from the beginning, with many Republican lawmakers saying Obama illegally rewrote America's immigration law by executive order. And some critics of DACA say it has taken jobs from natural-born Americans and encourages more illegal immigration.

According to a 2016 survey of DACA recipients by liberal think tank the Center for American Progress, 97 percent of respondents are either employed or in school. Another survey estimates that this group contributes about $1.2 billion annually in federal, state and local tax revenue, though they can't work federal jobs or receive federal benefits.

Since the White House announced plans to rescind DACA, Contreras has started to speak out. She said she's begun to organize marches around the city.

"I've had enough. I'm coming out, and I'm going to fight. I'm tired of sitting over there in the shadows and have people beat up on me. And have people tell me what I am and what I'm not," Contreras said.

And while she hasn't explained to her two young sons what being undocumented means or the precarious position it has left her family in, she plans to.