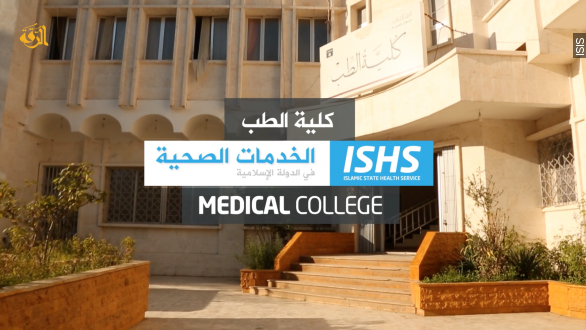 A new propaganda video released by ISIS this week stands in stark contrast to videos it typically shows of beheadings and violence, so why the change?

When it comes to ISIS propaganda videos, one might be accustomed to seeing either footage like this.

Or maybe the more common shot of a couple dozen jihadists armed to the teeth walking toward the camera.

But then there’s stuff like this, released this week.

No guns, no combat fatigues, no threats against the so-called Crusaders — just a hospital in Raqqa, ISIS’ de-facto capital in Syria. Not what you’d typically expect from a group known for its gruesome beheading videos.

So what’s up with the change in scenery? Aside from the fact ISIS has blatantly ripped off the England’s National Health Service logo, these types of videos aren’t new. Consider them a form of positive propaganda.

Really, all of the videos released by ISIS serve as propaganda. But while the adrenaline pumping action movie-esque videos it typically releases cater primarily to those willing to fight, these videos are meant for a different audience — would-be residents.

“New developments this morning about ISIS’ recruiting efforts targeting young people in the United States. A young woman, lured into the terror groups clutches running away from home to join them in Jihad," an anchor on CNN reported.

“These are some of the young women who have gone before. In all, 50 to 60 British women and girls are now thought to have left behind families and friends to travel out to the Middle East and join Islamic State," a reporter for BBC said during a video.

Videos of ISIS recruits performing maintenance work in cities under their control or footage of amply stocked stores are meant to showcase the “stateness” of their so-called Islamic State.

It’s why the footage typically appears in ISIS’s less contested regions, such as Raqqa in Syria or Mosul in northern Iraq. With less fighting, the group can produce videos highlighting its governance.

Still, it’s important not to take the ISIS videos at face value. Washington Institute Richard Barrow Fellow Aaron Zelin, who studies jihadist groups extensively, explained as much back in February.

“But the reality is is that you’ve had a number of reports from Human Rights Watch, from Amnesty International you know about garbage piling up, people not getting services, people getting screwed over with all the taxes, the economy is going to a halt, rolling blackouts…”

So yeah, it’s not all shwarma and ferris wheels. These videos are propaganda, after all.

This video includes an image from Department of Defense / Christine June.