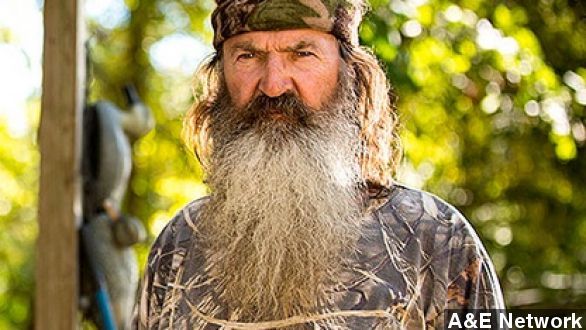 The company released a statement defending its decision to continue the show and supporting Phil Robertson, saying he had apologized for his comments.

Well, that didn’t take long. About a week after A&E Networks suspended “Duck Dynasty” patriarch Phil Robertson for offensive comments, the network announced it will “resume filming Duck Dynasty this spring with the entire Robertson family.”

The company released a statement defending its decision to continue the show and supporting Phil Robertson, saying he had apologized for his comments. (Via A&E)

They write, “Duck Dynasty is not a show about one man’s views. … in many episodes, they come together to reflect and pray for unity, tolerance and forgiveness. These are three values that we at A+E Networks also feel strongly about.” (Via Twitter / @nbcnightlynews)

Robertson was temporarily suspended after remarks he made during an interview for GQ magazine.

Robertson then grouped gays with terrorists and drunkards, adding that he was a Bible thumper and that sin was not logical. He also said black people were happier before the civil rights movement. (Via Us Weekly)

A&E’s reversal on Robertson’s suspension has many media outlets critical of the network’s actual motives.

“It says our core values are centered around creativity, inclusion and mutual respect. Is that why A&E tried to get them to stop praying and saying Jesus in their show? It’s a bunch of bologna if you look at this it’s about profit.” (Via Fox News)

Anchor: “These people must have some following Cracker Barrel puts their stuff back on the shelves, this guy was suspended now he’s back on air.”

Anchor: “And you look what happened to Paula Deen they basically…”

Anchor: “They must bring in more customers.”​ (Via WOIO)

And it’s true Duck Dynasty is one of cable TV’s most-watched shows with upwards of 14 million viewers. (Via Businessweek)

In its statement, A&E also said it will air a national public service campaign promoting tolerance and acceptance among all people. Season 5 of “Duck Dynasty” will air Jan. 15.