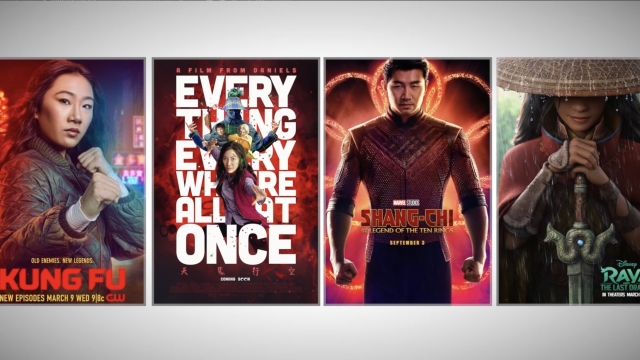 Asian Americans are leading a charge to create more nuanced martial arts storytelling, with one group named Martial Club at the forefront.

In 1973, the movie "Five Fingers of Death" introduced American audiences to martial arts, and the genre immediately dominated the U.S. box office. Warner Bros. "Enter the Dragon" came out that same year, becoming the first martial arts movie produced by an American studio and the highest grossing martial arts film of all time.

Since then, martial arts movies in Hollywood have come and gone in waves.

"The last time we saw martial arts in the industry, and that was cool, was like, early 2000s," filmmaker, actor and martial artist Andy Le said.

Hollywood is seeing a new wave of martial arts projects with films like "Everything Everywhere All At Once" and TV shows like "Kung Fu." Now, Asian Americans are finally leading the charge and pushing for more nuanced martial arts storytelling.

"I grew up on Hong Kong martial arts films, and those are wonderful, but it's not all there is," said S.L. Huang, martial artist and author.

At the forefront of this new wave of martial arts films is Martial Club — a rising group of filmmakers and martial artists started by Andy Le, Brian Le and Daniel Mah. The group started on YouTube and has garnered over 745,000 subscribers.

Martial Club's work includes original short films like "Fist of Fury," which came out in 2020. In recent years, they've also worked as stunt performers, fight choreographers and actors for movies like Marvel's superhero-action flick "Shang-Chi and the Legend of the Ten Rings" — where Andy Le was cast as the skilled warrior "Death Dealer" — as well as indie darling "Everything Everywhere All At Once."

"We believe in the potency of the message of Kung Fu movies, and that's why we as Martial Club are trying to revive that genre and tell new stories and send new inspirational messages to today's world," Mah said.

"It really is a mode to share our culture and our backgrounds, but be able to tell stories that are a lot more layered," Han said.

Starring Michelle Yeoh, "Everything Everywhere All At Once" is a genre-bending martial arts film that transcends science fiction, philosophy, comedy and family drama.

The film's martial arts choreography is as much a storytelling device as it is a visual feast. It leans into absurdity, which opened the door for Martial Club's "wackier" non-traditional fighting styles. Directors Daniel Kwan and Daniel Scheinert approached the team directly to help with their envisioned fight scenes — where objects like fanny packs and sex toys are used as weapons.

Beyond the inventiveness of "Everything Everywhere All At Once," other recent films like Disney's animated "Raya and the Last Dragon" have introduced American audiences to more cultural fighting styles from Indonesia, Thailand, Vietnam and the Philippines.

"It's really amazing to see some of these traditions that are lesser known around the world gain some more global knowledge as people will get to see them," said Huang, who has studied Kung Fu, Muay Thai, Taekwondo and Western kickboxing.

"The world of martial arts is so vast, and Martial Club makes it its mission to explore every facet, every corner of this world," Mah said.

"There's a lot of different martial art styles all over the world, and, you know, the world hasn't seen Cambodian style martial arts yet," Sao said. "We made a film, all of us, called 'Hanuman' that's going to introduce the world to Cambodian martial arts, and I can't wait."

As this wave of martial arts in Hollywood continues and another project directed, produced and filmed by Martial Club debuts later this year — the filmmakers make sure to pay tribute to their predecessors.

"We are standing on the shoulders of giants who came before us," Mah said.

"We just want to make sure we are representing the best we can the way our heroes, their generation, did for us," Sao said.