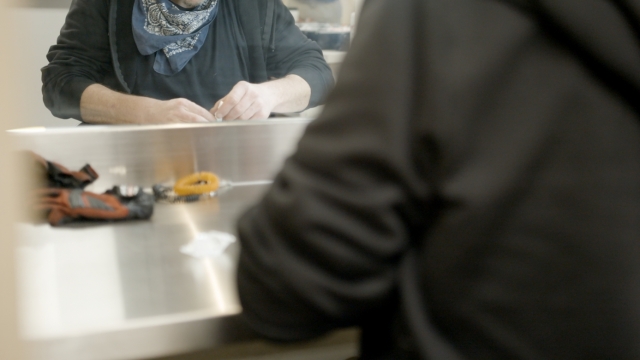 OnPoint NYC is one of only two centers in the nation that aims to prevent overdoses by creating a welcoming environment for drug users.

In a private facility in Harlem, New York, a man named Danny is about to shoot up heroin. He says it's a safe place to be.

It's an overdose prevention center — one of only two in the nation.

"They will keep you from having an overdose," Danny said. "They have the medication that they put into you to clear out, to stop."

The two centers, one in Harlem and the other one in New York’s Washington Heights neighborhood, are run by the nonprofit OnPoint NYC.

"For me, it was a response to losing too many people to overdoses," said Sam Rivera, executive director of OnPoint NYC.

Rivera says the primary purpose is to stop overdose deaths; it's not about rehab or to stop people from using.

"The goal is to keep them alive," Rivera said.

They also create a welcoming environment for their participants — that’s what they call the visitors looking for a safe place to use drugs.

"It's an opportunity for us to give them a space that's respectful, that's supportive, that treats them with love and really humanizes their process," Rivera said.

The facility opened last year after a record number of drug overdose fatalities in the city during the pandemic.

"This is really a response to a very scary time we're in," Rivera said.

As the pandemic lingered, the New York City Department of Health recorded 30 drug overdose deaths for every 100,000 residents, just in 2020. That’s triple the amount from 20 years ago.

As an overdose prevention specialist at OnPoint NYC, Rayce Samuelson is in charge of the closed-off area —a room with booths and staff with medical background where people can use drugs such as heroin or cocaine.

"We have people sniffing, injecting, smoking and a combination of the three," Samuelson said.

Visitors bring their own drugs, but the staff provides them with clean syringes and other supplies.

"We have a variety of different sized needles, tourniquets, band-aids, gauze, alcohol pads, everything needed to use safely," Samuelson said.

To monitor possible overdoses, Sameulson says they have a strict 4 to 1 ratio between how many staff members and participants are in the room.

Since opening last November, there have been over 1,000 participants. Staff at the centers have reversed at least 270 overdoses.

"We have this Narcan if we need it, and if we see something go down quick," Samuelson said.

The new centers have faced a backlash from local groups and politicians. Those against the program believe it encourages and enables people who have addictions instead of doing something to actually help them.

Newsy reached out to her office for an interview, but she was not available.

For its part, OnPoint runs its two centers on funds from private donors.

"People say to me what you just said, 'Oh, let's go outside and tell people, hey, you want to stop? Let me send you to this place,'" Rivera said. "They've all been there. It doesn't mean they can't go back and get it, but in the interim, while they're still using, we're going to keep them alive, and that's a responsibility of the community as well."

For Danny, it hasn’t been easy to stop using. He says he's been using for 38 years and once did quit everything for three years straight.

"But God knows why I started again," Danny said.

At the centers, the participants can also receive medical and holistic services at no charge, and many of the people on staff were once users.

"I came here as a participant myself last year, and I'm in recovery over a year," said Michelle Garrow, a holistic health specialist. "After a while of volunteering here and everything, they offered me a job, and it just was a great opportunity."

As for OnPoint, Rivera says he plans to open more facilities and help other organizations around the country open their doors with a goal of saving lives.