A Northern California Wildfire Has Forced Residents To Evacuate 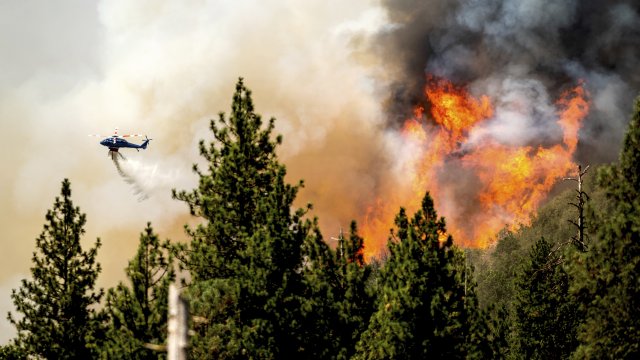 Heat and dry conditions prompted an out of control wildfire in Northern California, near Yosemite National Park.

"The fire's been coming towards us faster and faster," said Wes Detamore, a Mariposa resident.

A wildfire is out of control in Northern California.

The nearly 17,000 acre Oak Fire exploded over the weekend into the state's largest active fire.

"We made it out, the animals. I can always rebuild," said Rodney McGuire, a Mariposa, California resident.

Heat and dry conditions prompted an unprecedented growth of a fire that just started Friday.

"It's it's really heartbreaking because it's been year after year, you know, and just to think about the entire state here and everywhere else, you know, there's been so many fires and so many homes," said Boone Jones, a Mariposa, California resident.

Firefighters are struggling to contain a fire burning in steep, rugged terrain.

"It's not giving people a lot of time and they sometimes they're just going to have to evacuate with the shirts on their back," said Jon Heggie, the Battalion Chief of Cal Fire.

Firefighters say a handful of homes have been destroyed so far — as thousands get orders to leave.

"You have a lot of uncertainty. You have a lot of fear. Of course, we have a place for people to sleep, to get food and to get some information. We have nurses here in case there's any health issues," Wilson said.

Amber Blalock and her kids were among the evacuees.

"We had to quickly get as much as we can. And so we were able to get one dog and one cat and we had to just open the gate to let our chickens save themselves. But we couldn't find Coda," Blalock said.

One of the family's cats got left behind as the flames grew closer.

But as crews battle by land and air to save life and property, there's victory amid the flames.

"We got the word today that animal control went out and they found Coda the kitty. And so he is at the shelter right now and we're actually hoping to go get him right now," Blalock said.

It's a much-needed shot of good news in a place staring down the barrel of a hot, dry climate, ripe for spreading fire.

"I feel like we're going to do what we can to at least have a chance," said Jerry Cal, who was ordered to evacuate.