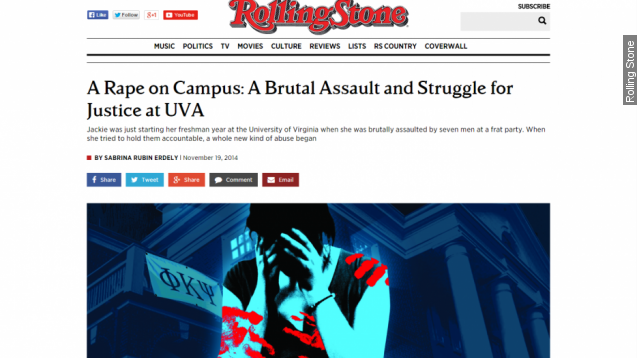 Rolling Stone's managing editor steps down as the magazine battles at least two lawsuits stemming from a now-retracted article about an alleged rape.

Rolling Stone is dealing with yet another lawsuit stemming from a now-retracted article that detailed an alleged rape on the University of Virginia campus.

As expected, three U.Va. graduates are suing Rolling Stone, the magazine's publisher and Sabrina Rubin Erdely, the journalist who wrote the article. All three graduates were members of Phi Kappa Psi, the fraternity at the center of the alleged sexual assualt.

According to the paperwork filed in a U.S. District Court, the three graduates suffered "vicious and hurtful attacks" because of Erdely's "false claims" and are seeking nearly a quarter of a million dollars for their troubles.

This lawsuit comes just months after a U.Va. dean filed a nearly $8 million lawsuit against Rolling Stone, claiming she was portrayed as a "villain" in Erdely's article. Here's a side-by-side of an image of the dean next to the artist's rendering that appeared in the article.

Rolling Stone has apologized for the article. It has yet to comment on this most recent lawsuit.

This video includes images from Getty Images and Keneth Cruz / CC BY NC 2.0.